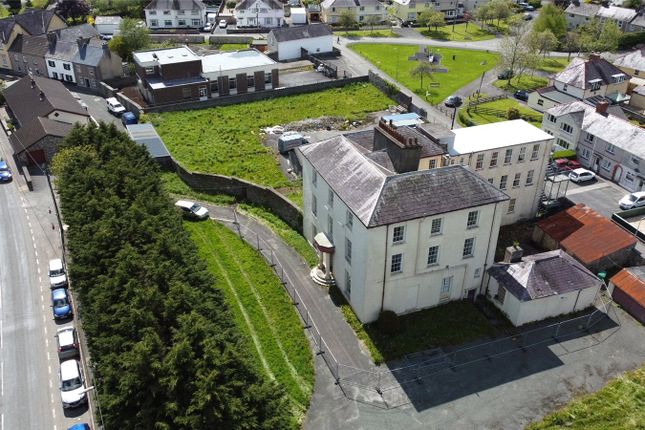 A Grade II listed Georgian Town House in need of improvement offering over 7500 sq/ft (700 sqm) of accommodation. Recently used as a boarding house and considered an ideal development opportunity of the main house, outbuildings and grounds which extends to approximately 1.2 acres

Llandingat House Is a Late Georgian detached town house in the market town of Llandovery, which offers typical facilities in the form of shops and businesses, railway station, public houses and hotels, primary school and College. The house is set back some way from the road, surrounded by its own grounds and outbuildings, in total extending to approximately 1.2 acres.

The building dates from the early nineteenth century, probably 1813 to 1814, such substantial town houses are relatively rare in West Wales in that period. The house was built for David Lloyd harries who had been an attorney in the town since 1808. In 1870, it passed into the hands of Lieutenant Colonel Edward Pryse Lloyd, who changed his name to Lloyd Harries, as a condition, when he came into his inheritance. In the 1890s his brother Tudor Lloyd Harries became the owner, and since then the house has been occupied by the re named Llandovery College as a boarding House.

The house is painted roughcast and (truncated)

Llandovery is an ancient market town often described as the gateway to West Wales situated at relatively low level at the foot of the Brecon Beacons and Black Mountains. The village of Myddfai famous for its folklore is nearby where Prince Charles has his Welsh home. The A40 trunk road running through Llandovery gives good access to other towns with Brecon only 20 miles to the east and Cardiff being within 60 miles. The M4 is within easy reach to the South. Llandovery has a railway station on the Heart of Wales line which links Shrewsbury to Swansea with connections on to the main line network. Llandovery benefits from a range of shopping facilities which includes a variety of shops, supermarket, post office, butchers, doctors surgery, public houses/restaurants, junior school and Llandovery College in the private sector.

Property descriptions and related information displayed on this page, with the exclusion of Running Costs data, are marketing materials provided by McCartneys LD3 - F&C, and do not constitute property particulars. Please contact McCartneys LD3 - F&C for full details and further information. The Running Costs data displayed on this page are provided by PrimeLocation to give an indication of potential running costs based on various data sources. PrimeLocation does not warrant or accept any responsibility for the accuracy or completeness of the property descriptions, related information or Running Costs data provided here.

See all recent sales in SA20