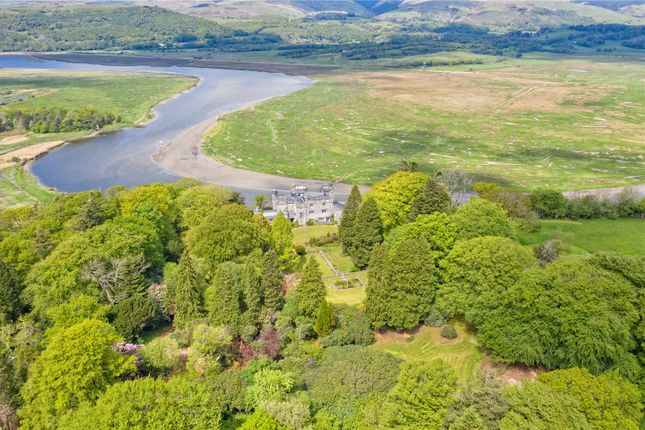 The Property
Built in Regency Gothic style in the early 19th Century, Glandyfi Castle stands high on a beautifully wooded hillside from where it enjoys far reaching views across the glorious Dovey Estuary to the Mountains of Snowdonia National Park. It stands surrounded by mature gardens, grazing land and woodland with a range of versatile outbuildings.

The Castle, built of local stone and slate with mullion windows, square, round and octagonal towers and impressive chimneys, has been recently renovated throughout. It has striking accommodation that is elegant, gracious and grandiose while comfortable and contemporary. Its superb architectural detail has been restored and enhanced and embraces modern day comforts including an efficient zoned heating system, luxurious bathrooms and a contemporary styled kitchen.

Along with a new roof, the Medieval stone courtyard with its immense stone walls, now has a glass roof creating a stunning atrium ideal for dining, sitting and large- scale entertaining.

The front door opens to a panelled hall and inner hall from where an Imperial staircase rises to the first floor, lit by a deep mullion window. The drawing room is elegant and light and the dining room is oak panelled with a Regency moulded ceiling. The delightful octagonal library has a Nash influenced coved ceiling, a pink marble fireplace and four Gothic style windows framing the magnificent views up, down, and across the Dovey Estuary. Along with a comfortable family sitting room, a highly practical and striking contemporary kitchen, the atrium is a superb addition to the castle.

Upstairs the house has been renovated to create nine double bedrooms, all complimented by their own bathrooms. These are attractively decorated and individual in style. Most notable is the master suite with its high ceiling, deep windows, fireplace and superb octagonal bathroom with a circular bath in the centre. A further en suite bedroom is accessed from the courtyard.

The Lodge
Recently renovated, with a new electric heating system, The Lodge is found with its own private garden at the entrance to the driveway. The accommodation is pleasantly finished and comprises a sitting room, kitchen, study/bedroom, double bedroom and shower room.

History
Glandyfi Castle was built in the early 19th Century by an unknown architect for George Jeffreys and his wife Justina when a picturesque castle on the Dyfi in Regency Gothic style would have spelt the height of fashion and taste.

Built on a beautiful wooded hillside known as Garreg, the land was bought by Edward Jeffreys of Shrewsbury during the 18th Century when he became an investor of silver and lead mines, a resource which was proving valuable to some local landowners. The castle was built by Edward Jeffreys’ grandson, George, and his choice of location exploited the historical romance associated with castles of antiquity, being situated on a hillside overlooking the original Aberdovey Castle on the wetlands of the estuary below.

The castle and surrounding estate is said to have remained in the Jeffrey family until the estate was dispersed in 1906. Since that time it has had a series of owners, the most notable being Sir Bernard Docker, who was a flamboyant businessman and chairman of British Small Arms (which in peace-time manafactured the Triumph and bsa motor cycles) and Daimler motor cars. Bsa bought the castle during the 1950's for £12,500 and it became the topic for national headlines when Sir Bernard was accused of profilgate refurbishment with company money in a shareholder rebellion.

Location
Glandyfi Castle stands high on a hillside above the small village of the same name and with its own railway. Standing in a stunning location with the backdrop of rolling hills, it looks towards the popular seaside and sailing village of Aberdovey and is situated above the rspb Ynyshir Bird Reserve. The cry of curlew, geese, duck and oyster catchers can be enjoyed while standing in the grounds and nature abounds with sightings of otters and seals.

Just a five mile drive from the pretty market town of Machynlleth and eleven miles from the University City of Aberystwyth, both with a range of excellent amenities, the castle is also well placed for walking, cycling, riding and sailing. There are a number of nearby golf courses and most notably at Borth, Aberdovey and Harlech.

The area is noted for its beautiful countryside and stunning coastline with sheltered harbours and sandy beaches.

There are excellent pubs and restaurants nearby including Ynyshir Hall, considered to be one of Wales’ finest country house hotels with a highly rated restaurant. There is a regular train service to Machynlleth and Aberystwyth from London and the Midlands.

Gardens and Grounds
Glandyfi Castle is approached up a long driveway which meanders between wooded hillside with a profusion of rhododendrons and in the spring, carpets of bluebells, daffodils and primroses. The castle stands in the privacy of its landscaped gardens and grounds with sweeping lawns, well stocked borders with flowering plants and mature shrubs, walkways and paved terraces from where the breath taking views can be enjoyed.

Within the grounds is a hidden walled kitchen garden, now fallen into disrepair, along with various paddocked areas.

Outbuildings
Beyond Glandyfi Castle is a traditional court yard with a range of well-maintained and versatile buildings, garaging and workshop.

There is a range of former barns set away from the main residence which have the potential to be converted to residential or other usage, subject to the necessary planning permission being obtained.

A further range of agricultural barns are accessed down a track leading away from the castle and provide substantial storage for plant machinery and equipment. 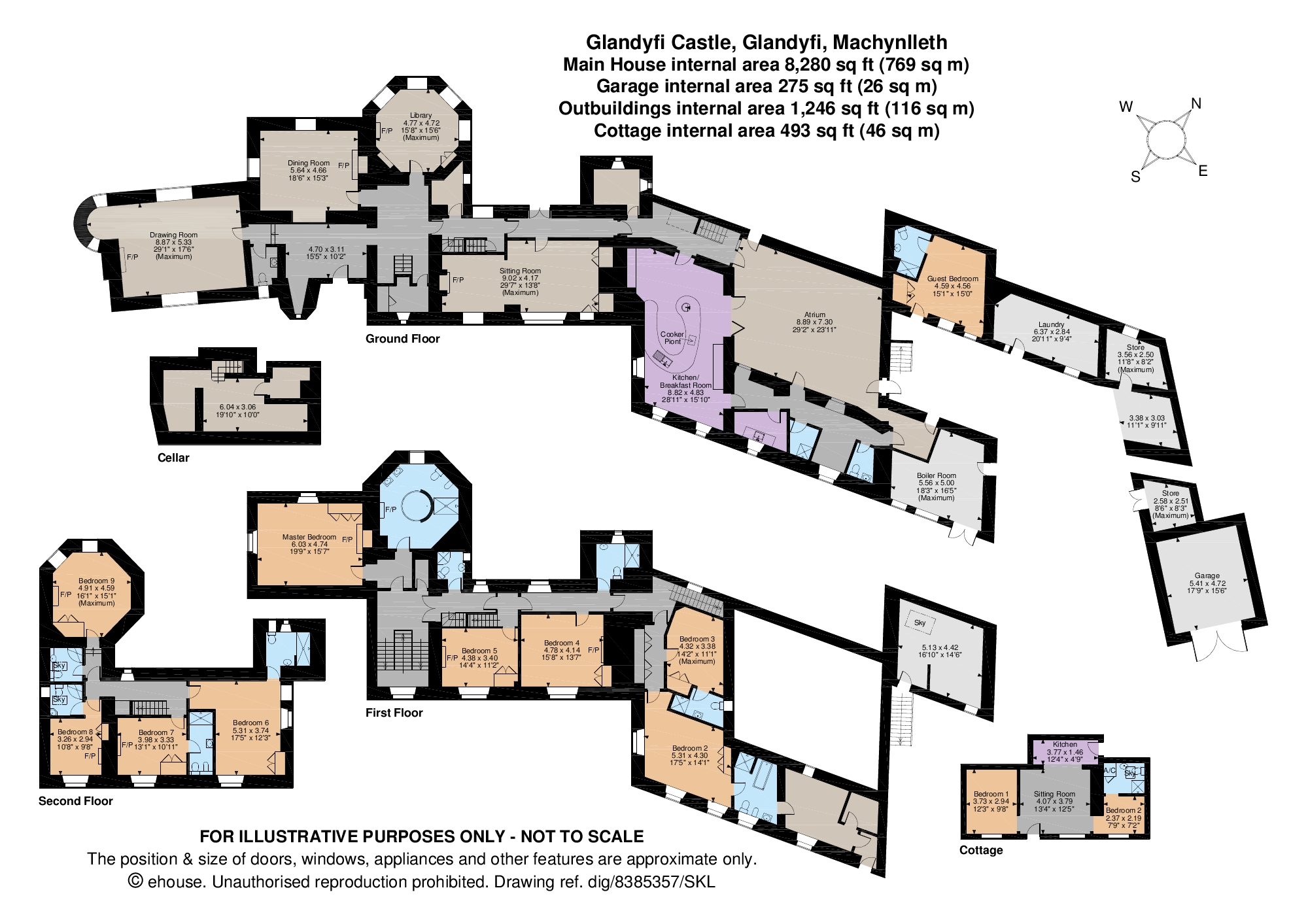 Property descriptions and related information displayed on this page, with the exclusion of Running Costs data, are marketing materials provided by Strutt & Parker - Shrewsbury, and do not constitute property particulars. Please contact Strutt & Parker - Shrewsbury for full details and further information. The Running Costs data displayed on this page are provided by PrimeLocation to give an indication of potential running costs based on various data sources. PrimeLocation does not warrant or accept any responsibility for the accuracy or completeness of the property descriptions, related information or Running Costs data provided here.

View all Glandyfi properties for sale

View all Glandyfi properties for sale

See all recent sales in SY20