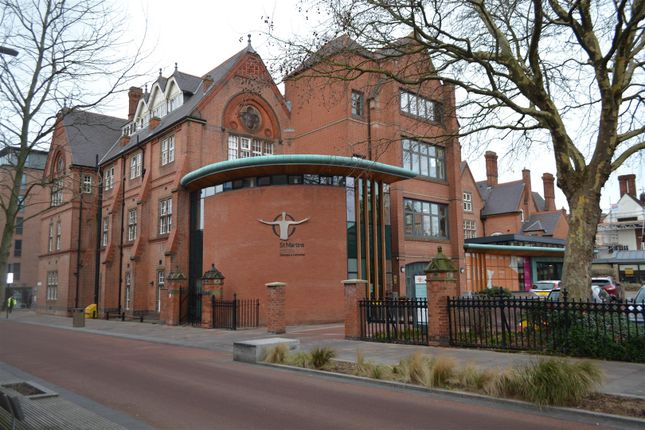 The premises comprise new and refurbished air-conditioned first floor offices in St. Martins House, an historic, Grade II Listed building next to Leicester Cathedral in the city's Historic Quarter famous for the recent discovery of the remains of King Richard III. The offices extend to 366.6 sq. M. (3,946 sq. Ft.) and are available on a new internal repairing lease for a minimum of three years. The accommodation can be divided into smaller suites if required.

St. Martins House is situated on the north side of Peacock Lane at its junction with Applegate and adjoining Leicester Cathedral in the City's Historic Quarter on the edge of the City Centre.

The area has undergone a substantial programme of regeneration especially since the discovery of the remains of Richard III just along Peacock Lane from the property. The historic Guild Hall is also close by.

The immediate area is pedestrianised but there is vehicular access to surrounding roads from St Nicholas Circle.

In the 2011 Census, the population of the Leicester City Council area was approximately 330,000, the highest in the East Midlands, with approximately 510,000 in the wider Leicester urban area. It is, therefore, the tenth largest city in the UK and England’s 11th largest urban area.

Leicester is situated adjacent to the M1 at its intersection with the M69 and, road communications are very good. The Midland Mainline Railway serves the city and the journey time to London St. Pancras is just over an hour. Furthermore, East Midlands Airport is approximately half an hour’s drive away.

Leicester is a cosmopolitan city with the largest ethnic population in the country with the majority of Asian origin.

There are two large universities, the University of Leicester and Leicester De Montfort with a combined population of approximately 40,000

Leicester has a broad industrial and commercial base with nearly 25% of the population working in the manufacturing sector compared with a national average of 15%.

The premises comprise a first floor office suite with shared facilities in this historic and attractive building in Leicester's Historic Quarter. The accommodation is arranged in three main rooms together with an executive office or meeting room which overlooks Leicester Cathedral and its grounds. The offices have secondary or modern double glazing, carpets, suspended ceilings with air conditioning to part.

The premises have central heating, air conditioning to part, dado trunking and broadband and are ready for occupation.

The premises are available on a new internal repairing lease for a term of years to be agreed.

An insurance rent is payable equivalent to 39p per sq. Ft. Per annum.

A service charge is payable with more details available on request.

Each party is to be responsible for their own legal costs in respect of the transaction.

VAT is payable on the rent and service charge.

Vacant possession will be granted on completion of legal formalities.

Property descriptions and related information displayed on this page, with the exclusion of Running Costs data, are marketing materials provided by Andrew Granger & Co, and do not constitute property particulars. Please contact Andrew Granger & Co for full details and further information. The Running Costs data displayed on this page are provided by PrimeLocation to give an indication of potential running costs based on various data sources. PrimeLocation does not warrant or accept any responsibility for the accuracy or completeness of the property descriptions, related information or Running Costs data provided here.