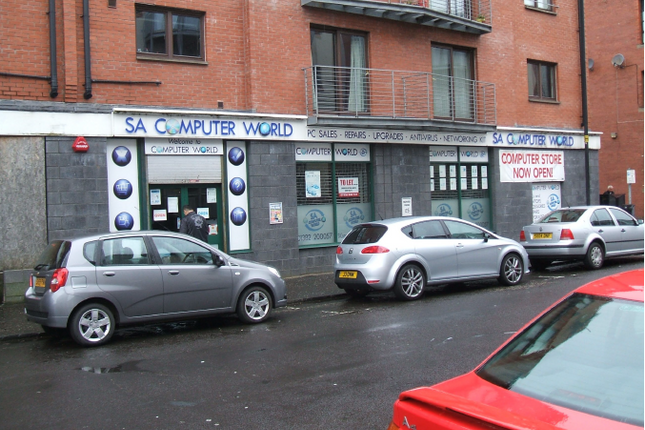 37 Trades lane has been fitted out to a high standard with carpet
covering through out and modern suspended ceiling, with a mix
of inset florescent and spot lighting. The property benefits from
a large open plan retail area with large store and WC facilities.

Both properties benefit from a substantial frontage and extensive
on street car parking.

Viewing is through the Sole Letting Agents, Messrs. Graham + Sibbald.

Dundee is Scotland’s fourth largest city, with an estimated
population in the region of 145,000, and a catchment population
of approximately 515,000. The city is the regional centre for
commerce, retailing and employment within the Tayside Region
and is located on the east coast of Scotland with Aberdeen, Edinburgh and Glasgow all within 90 minutes drive time.

The subjects themselves are located on the west side of Trades
Lane, near to its junction with Seagate. The subjects are a short
distance from the Wellgate Shopping Centre and pedestrianised
Murraygate, which forms part of Dundee’s prime retailing area.
The surrounding occupiers include a mix of commercial and
residential uses and include Machine Mart and H.S.S. Hire
Group.

All figures are quoted exclusive of VAT; however our client reserves the right to charge VAT, if applicable.

Property descriptions and related information displayed on this page, with the exclusion of Running Costs data, are marketing materials provided by Graham + Sibbald, and do not constitute property particulars. Please contact Graham + Sibbald for full details and further information. The Running Costs data displayed on this page are provided by PrimeLocation to give an indication of potential running costs based on various data sources. PrimeLocation does not warrant or accept any responsibility for the accuracy or completeness of the property descriptions, related information or Running Costs data provided here.