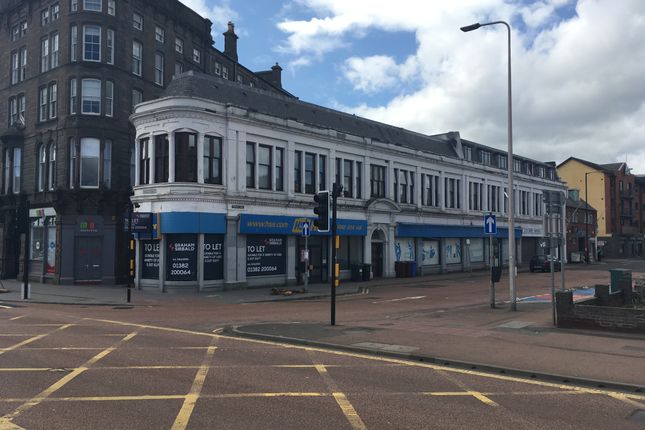 The subjects comprise the ground floor of a 2 storey plus attic stone constructed building under a pitched roof. To the rear of the building a single storey extension has been added to create the main workshop accommodation, under a pitched concrete sheet clad roof.

The subjects benefit from an extensive glazed frontage to both East Dock Street and Trades Lane and as such may suit a variety of commercial uses.

Internally the accommodation currently comprises a mixture of former sales showroom areas, storage and workshop. There are two pedestrian access points on the Trades Lane elevation along with a
further two vehicle access roller doors.

The subjects are available on standard commercial terms for a negotiable period.

Rental offers in the region of £35,000 per annum are invited.

Viewing is through the Sole Letting Agents, Messrs. Graham + Sibbald.

Dundee is Scotland’s fourth largest city with an estimated population of 145,000 and a catchment population in the region of 515,000. The city is the regional centre for commerce, retailing and
employment within Tayside, and is located on the east coast of Scotland with Aberdeen, Edinburgh and Glasgow all within 90 minutes drive time. The city has its own Airport with daily flights to London (Stansted Airport). Dundee Railway Station forms part of the main East Coast Railway Line, which runs services into London Kings Cross station.

Dundee is presently undergoing a one-billion pound transformation to its waterfront which comprises significant development not only to the City Centre but also along Riverside Drive to the City’s airport and the surrounding area. The centre piece to the waterfront development is the V&A Dundee an International Centre for Design in
Scotland. The first ever design museum to be built in the UK outside London.

The subjects themselves are located on the junction of East Dock Street and Trades Lane, within the heart of the Dundee Waterfront. Neighbouring occupiers are a mixture of commercial users including the Apex Hotel, Customs House (proposed new hotel), Machine Mart and Dundee Bus Station. To the south of the subjects is the City Quay area which includes a mixture of commercial, leisure and residential facilities.

For the avoidance of doubt all figures quoted are exclusive of VAT unless otherwise stated and any prospective tenant should satisfy themselves independently as to the incidence of VAT involved in this transaction.

Property descriptions and related information displayed on this page, with the exclusion of Running Costs data, are marketing materials provided by Graham + Sibbald, and do not constitute property particulars. Please contact Graham + Sibbald for full details and further information. The Running Costs data displayed on this page are provided by PrimeLocation to give an indication of potential running costs based on various data sources. PrimeLocation does not warrant or accept any responsibility for the accuracy or completeness of the property descriptions, related information or Running Costs data provided here.