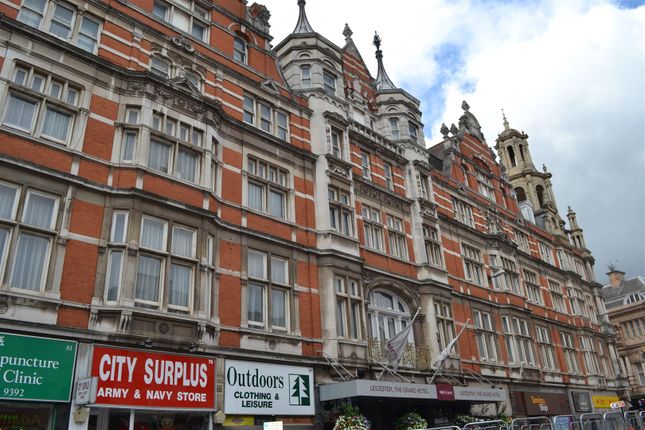 This is an excellent opportunity to acquire former restaurant, bar and ancillary facilities within Leicester's best-known hotel in the heart of the City. The premises are being offered as an opportunity to create a gym and health facility. The accommodation extends to a gross internal area of approximately 650 sq. M. (7,000 sq. Ft.). The premises, at basement level, are directly accessible from the main hotel foyer by lift or stairs and with a separate access from Granby Street. All proposals are subject to obtaining appropriate Planning Permission.

The Mercure Grand Hotel is situated on Granby Street in Leicester City Centre, a busy thoroughfare running between Leicester mainline railway station and the main retail core of the City. The station is a mere five-minute walk away. Leicester Cathedral and the recently-opened King Richard III Visitor Centre are also within walking distance.

In the 2011 Census, the population of the Leicester City Council area was approximately 330,000, the highest in the East Midlands, with approximately 510,000 in the wider Leicester urban area. It is, therefore, the tenth largest city in the UK and England’s 11th largest urban area.

Leicester is situated adjacent to the M1 at its intersection with the M69 and, road communications are very good. The Midland Mainline Railway serves the city and the journey time to London St. Pancras is just over an hour. Furthermore, East Midlands Airport is approximately half an hour’s drive away.

Leicester has a broad industrial and commercial base with nearly 25% of the population working in the manufacturing sector compared with a national average of 15%.

The premises comprise a former restaurant, bar and ancillary accommodation in the basement area of Leicester's best-known hotel. It includes a large, former dining hall, kitchen, bar and connected areas with direct access from the main hotel foyer. There is also lift access from the all floors of the hotel and a separate entrance from Granby Street.

The Grand, as it is commonly known, is a 4 Star hotel with 106 rooms and a dedicated large car park at the rear.

The premises have a gross internal floor area, measured in accordance with the RICS Code of Measuring Practice, of approximately 650 sq. M. (7,000 sq. Ft.)

The proposal is for an independent gym or spa operator to establish a new facility which would attract both hotel guests and the general public and to add to the excellent facilities already in place.

The property is connected to main electricity, gas, water and drainage services and the accommodation is heated by central heating radiators from gas-fired boilers.

Planning permission will be required for D2 use.

A new lease will be offered on an internal repairing basis for a minimum term of 5 years.

An EPC is not required.

Each party will be responsible for their own legal costs incurred in respect of this transaction.

Vacant possession will be granted on completion of legal formalities.

Strictly by arrangement with the sole agents, Andrew Granger & Co. Please call Kevin Skipworth on or .

Property descriptions and related information displayed on this page, with the exclusion of Running Costs data, are marketing materials provided by Andrew Granger & Co, and do not constitute property particulars. Please contact Andrew Granger & Co for full details and further information. The Running Costs data displayed on this page are provided by PrimeLocation to give an indication of potential running costs based on various data sources. PrimeLocation does not warrant or accept any responsibility for the accuracy or completeness of the property descriptions, related information or Running Costs data provided here.