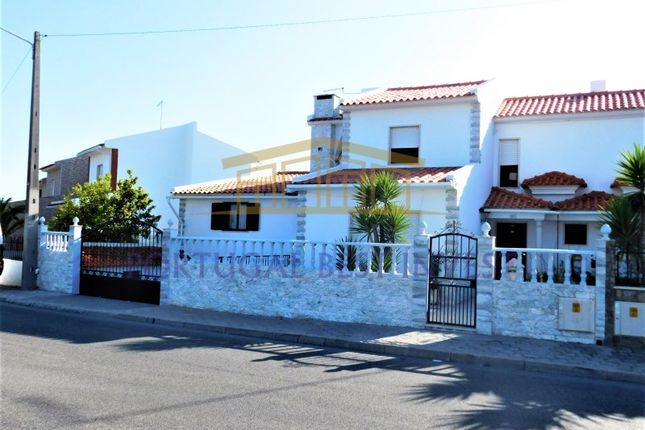 Villa with 5 bedroom for sale in Nazaré, It also has a large living room, and with another dining room, has 2 full bathrooms, one on the ground floor and another on the first floor, it has also a large fully equipped kitchen with all appliances.
It has a large sunroom inside the house next to the kitchen, it also has another pantry next to the kitchen, it has a large garage in the lower part of the house, it also has a large lounge or leisure room in the lower part of the house, another pantry at the bottom of the house next to the hall at the bottom of the house, there is another pantry at the front of the house next to the garage.
The house also has a fireplace next to the living room.
It has a large patio on the ground floor next to the kitchen, it has a very large Barbecue area next to the kitchen and the patio outside the house. The house also has piped gas ready to be connected to the national grid, the house also has a garden around the front of the house, the house also has a small patio in front of the house that has direct access to the garage and lower part of the house.
The house was completely renovated 4 Years ago, such as new plumbing, all new electrical system, new floor of the house, completely renovated outdoor patio, barbecue area completely new implantation, repair of the interior walls, painting with insulation throughout the house on the interior, insulation and repair of the exterior of the house walls, exterior painting with special insulating paint.
The house is in excellent condition as new and well cared for.
History about Vila da Nazaré
The municipality and parish were named 'Pederneira' until 1912, when, by law, the toponym was changed to 'Nazaré'. The former municipality of Pederneira had a charter in 1514, given by D. Manuel I, and was integrated into the Alcobaça coutos.
Pederneira, currently one of the neighborhoods of the town of Nazaré, still maintains the building of the former Paços do Concelho, the pillory, the parish church of Nossa Senhora das Areias and the church of Misericórdia, as testimonies of its former condition as the seat of the municipality.
The giant waves of Nazaré (in Praia do Norte) have gained worldwide fame and are already registered in the Guinness Book for surfing.
The toponym 'Nazaré' is intrinsically linked to the Legend of Our Lady of Nazaré.
Throughout the 20th century, Nazaré progressively evolved from a fishing village to a village dedicated to tourism, having been one of the first points of international tourist interest in Portugal. The tourism industry is now one of the main employers in the town.
It is part of the Nazarene tradition that their women wear seven skirts. The explanation is not consensual, but it is closely linked to the toil: The Nazarenes had the habit of waiting for their husbands and children, when they returned from fishing, on the beach, sitting on the beach, spending hours there in vigil. They wore the various skirts to cover themselves, the top ones to protect their head and shoulders from the salt spray, and the rest to cover their legs.[7]
The women's seven skirts and the men's flannel shirt and black cap attracted names such as Lino António, Jorge Barradas, Stanley Kubrick or Cartier-Bresson during the 50s and 60s of the last century., the daily life of the Nazarene people.[8]
It is impossible today to talk about Nazaré without mentioning the world record for the longest wave ever surfed, of 30 meters, established by Garrett McNamara, in Praia do Norte, in November 2011.[9]
Due to the worldwide projection that the giant waves of Nazaré have, the village has become the host of the biggest international surfing championships and receives many surfers of this modality, as well as thousands of curious people and tourists who come to enjoy its brave demonstrations.
This house is not only a big house for a large family to live with a lot of indoor and outdoor space, but it could also be ideal to transform into a Surf Camp business or local accommodation
Come and visit this Wonderful Villa so you can see its potential
We wait for you
Energy Rating: In progress
#ref:pbi-942

Property descriptions and related information displayed on this page, with the exclusion of Running Costs data, are marketing materials provided by Portugal Best Invest, and do not constitute property particulars. Please contact Portugal Best Invest for full details and further information. The Running Costs data displayed on this page are provided by PrimeLocation to give an indication of potential running costs based on various data sources. PrimeLocation does not warrant or accept any responsibility for the accuracy or completeness of the property descriptions, related information or Running Costs data provided here.