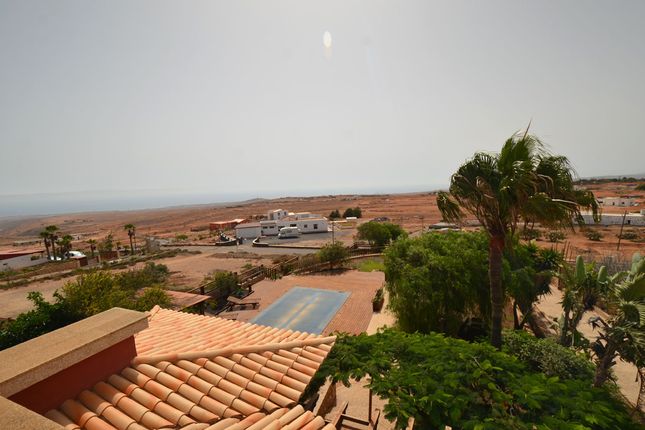 Luxury villa built to hight standard with 5 bedrooms, two large, sophisticated living rooms, pool with panoramic views, huge roofed barbecue area, wine cellar, and much more, in a unique south-facing slope with a great panoramic view to the south and the sea, less than 5 minutes from the technology park of Fuerteventura.

The client has several construction companies and in 1994 this villa was planned and built for his family. In 2003 he rebuilt and enlarged the villa, for which he imported many solid granite stones, columns, floor slabs and cobblestones from Galicia and Portugal. He is aware that he will not recover the construction costs for this luxury villa, but he would like to use the selling price to build four houses for his children because they all want to continue to live on Fuerteventura.

The exceptionally quiet location on the southern slope and the breathtaking panoramic view are unique, even though it is less than 10 minutes to the center of the capital Puerto del Rosario. Thanks to the centric location, it is only about 12 minutes to the airport or the hospital and about 20 minutes to the large sandy beaches of Corralejo.

At the lower and most southern part of the large property clad with natural stone walls is the entrance through an automatic roller door with door intercom and camera. After the entrance, the first two carports are on the right hand side below the stepped front garden, which leads over several stairs to the huge pool area, surrounded by green gardens. The automatic roller door leads past the first two carports, via the granite-paved driveway, past the villa to the large, sheltered courtyard behind the villa, where there are several carports and the large covered open-air kitchen / barbecue area as well as the winery and guest bathroom and storage space, including a real fountain with fish, in the middle of the courtyard in front of the main entrance of the villa.
The walls clad with natural stones along the access road that ends shortly after the villa, as well as the hillside location, guarantee the privacy of the property. However, once you have driven through the entrance gate, you are in front of a wealthy property in Galicia, an ambience that is unique on Fuerteventura. Not only the massive granite columns and stones, but also the large, absolutely protected courtyard behind the villa make you believe you are in green Galicia.

From the large courtyard, the stairs, which are also made of granite stones, lead up the southern slope, past landscaped fields with greenhouses and automatic irrigation systems, large gardens to the large chicken coop. On the northern border of the 3,000m2 property, there are two huge concrete water reservoirs with a capacity of approx. 120,000l. From here you can look north over the large nature-protected valley of Guisguey to Lanzarote. To the east you see the Atlantic and to the south you can look over the entire property, the landscape of the island to the Atlantic. You will not get any more new neighbors, as the property is adjacent to the pristine nature reserve of Guisguey. The ridge in the north of the property protects the entire residential area from the prevailing Pasat winds, which blow from the north almost all year round.

The large villa has several entrances and large patio doors to access the terraces and the pool level.
On the upper floor there is the large master bedroom with a walk-in closet, a large ensuite bathroom with whirlpool and a huge roof terrace with a great panoramic view to the south and the sea. Here you can dance the tango into the sunset.
In the northern area there is another now closed terrace that is used as a fitness room and study room, as well as another covered terrace with the technology cabinet for the converters, chargers and batteries of the photovoltaic system. The villa is connected to the municipal utilities, but the owner wants to be energy-independent and has therefore just ordered a second photovoltaic system so that he has one for all the lighting and another for the villa and can live completely independently of the municipal utilities.

Three of the four bedrooms on the ground floor have their own patio doors to the outside. You can also get from the large courtyard through the main entrance door into the hallway of the villa, from where you pass the massive tropical wooden staircase that leads to the upper floor, the four bedrooms, one of which also has its own ensuite bathroom, and the large bathroom in the first large, sophisticated living room, which also has a door to the kitchen with dining area. After the first living room you get to the second, new large living room, which is more like a living area, with many large windows and a great view of the pool level and over the island.
As you can see from the photos, only the best building materials were used in the villa. All windows are made of PVC with burglar-proof double glazing (hardened safety glass). Solid beech wood floorboards and travertine marmol were laid on the floors in the living rooms and bathrooms, and Gres tiles were used in the kitchen. All doors and built-in wardrobes are made of solid beech wood. The 32 windows of the villa ensure light-flooded rooms and the completely enclosed property with the high-quality outdoor areas ensure a great living ambience. You don't need to lock any windows or doors here, as you can live like in a private, enclosed village.

The second main entrance door leads from the driveway directly into the kitchen area with a small pantry and dining area. The kitchen island in the middle of the high-quality cherry wood kitchen with work surfaces made of green granite is just as practical as the entire kitchen equipment, including a large refrigerator, large freezer, oven, microwave, vitroceramic hotplate with its own stainless steel electric grill and extractor hood. In the new kitchen and in the large living room, modern LED built-in ceiling lights are installed in the suspended ceiling.
As is customary in Galicia, the roofs of the villa are covered with high-quality roof tiles and large parts of the facades are coated with solid granite slabs.

To the south of the villa is the large pool area, which was built from solid tropical wood planks around the 6.5 x 4m pool. Here you feel like you are on the sundeck of a cruise ship, as you have a great panoramic view of the lower lying landscape of the island without being seen yourself. At the eastern corner of the pool level is the covered dining area, which is often used for communal dinners at sunset. Even the garden paths and steps were made from imported granite stones. The entire outside area is spacious, with various green lawns and a mature population of trees and offers many private terraces and sitting areas that make you forget that we are on a desert island.

The heart of the Galician village / residential landscape is behind the villa, totally sheltered from the wind and sunk into the mountain. Here are two more fully covered carports, as well as the large covered party corner with open kitchen, brick grill and oven, the wine cellar built in a natural cave, as well as the large guest bathroom with shower and another storage room / guest room next door. The green hedge above the covered area, as well as the fountain standing on a piece of lawn in which real fish live, literally transport you to Galicia.

The villa, built in 1994 and enlarged and rebuilt in 2003, has all the papers, is properly registered in the land registry and cadastre and is being sold unencumbered.

Property descriptions and related information displayed on this page, with the exclusion of Running Costs data, are marketing materials provided by Kanarische Treuhand, and do not constitute property particulars. Please contact Kanarische Treuhand for full details and further information. The Running Costs data displayed on this page are provided by PrimeLocation to give an indication of potential running costs based on various data sources. PrimeLocation does not warrant or accept any responsibility for the accuracy or completeness of the property descriptions, related information or Running Costs data provided here.