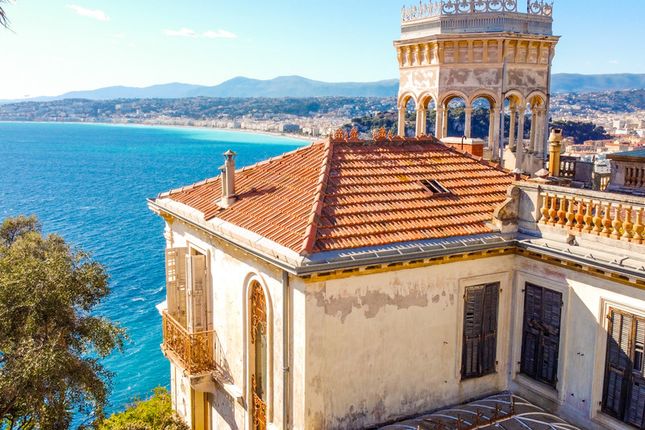 The villa has been empty for many years – since the property passed into the ownership of the Institut de France, who struggled to work out exactly what they should do with this remarkable legacy. Eventually the property was sold to the current owners - an entrepreneurial family with a taste for beautiful historic properties. The family have spent considerable time, effort and funds creating a project in conjunction with the Mairie de Nice (city hall) and the Architects de Batiments de France (the body responsible for historic monuments) which has now been approved within the exacting requirements for a property of this historical significance (more details in ‘The Future’ below). The plans now having been completed, approved and costed, the project is ready to be begun by the new owner. The usual time limit for commencement of works from approval does not apply in the case of a historic monument.

The property may have fallen into a level of disrepair, but it is weather proof. Enough of the beautiful original features still exist to infuse the visitor with a sense of history, the frescoes and vaulted windows, the colonnades and balustrading, the stunning murals and towers. And, of course, there is the simply breathtaking view. Perched in a commanding position above the Port de Nice, the view from the rooms and terraces is, without doubt, one of the most beautiful views on the French Riviera – the yachts in the port surrounded by traditional Niçois architecture, the war memorial and the tree covered promontory of the old Chateau de Nice site, across to the sweeping arc of the Bay of Angels and of course the glistening azur blue of the Mediterranean, stretching away to the horizon, fringed by the Estoril mountains - and to the rear of the city, the snow-capped tips of the foothills of the Alps.

The property is technically made up of four separate ‘villas’, although they are all effectively interconnected – Villa Beau Site, l’Isba, Villa Les Rochers and Villa Hyacinthe - and is laid out over several different levels, occupying the parcel of land from the Boulevard de Mont Boron all the way down to the legendary Basse Corniche, where the closest neighbour is the magnificent villa once owned by Sean Connery. There are so many rooms that it is hard to put a useful number on it, but we can say in excess of 20.

Plans have been drawn up, discussed, negotiated, costed and finally approved by both the Mairie of Nice (with the personal oversight of the Maire himself) and the Architects de Batiments de France, over a period of years. Having reached full approval stage, the project simply has to be started by the new owner. The plans for the new project represent a wonderful evolution of the villa from the era of Gisele Tissier to the present day and on, creating a contemporary property of the highest attainable standard, whilst retaining the essence of this one-off masterpiece. The approval includes both indoor and outdoor pools, a spa, and garaging for four cars, and restoration of both the staff and guest villas, as well as the main house, the total space being in excess of 600m2. These plans are available for inspection upon request. The final, finished property will surely be one of the most exceptional private dwellings on the Cote d’Azur.

Originally constructed in 1870, the property was given the name Villa Beau Site by the wealthy adventurer and trader Achille Larrey, who purchased the property in 1882, at the dawn of what was to become Nice’s first golden era. As Nice welcomed Queen Victoria of England and her entourage for the winter months, the City suddenly became the destination of choice for the rich and royal, and Beau Site was developed and modified by the owner to demonstrate his new-found status and wealth. As was often the case at the time, Larrey took his influence from the magnificent villas springing up along the Riviera coastline, using celebrated local architect Sebastien Marcel Biasini to turn his ambitious dreams into reality. Larrey added Corinthian columns and redesigned the tower, adding archways and terraces, with strong neoclassical references. Achille Larrey’s widow continued with his dream after his death, and around 1910 acquired an extra parcel of land to the north side of
the property, which allowed her to construct two additional ‘villas’ – one for staff and one for guests, completing the ensemble we still see today.

Later Beau Site was left to the Ville de Nice by Giselle Tissier, and has been designated a monument historique or national monument. The spirit of Beau Site lives on, those voices, the music, may have faded with time, but nothing can take away the feeling, or the history. It is time for a new golden age.

To read more about the history of the property please visit this link:

Property descriptions and related information displayed on this page, with the exclusion of Running Costs data, are marketing materials provided by Leggett Immobilier, and do not constitute property particulars. Please contact Leggett Immobilier for full details and further information. The Running Costs data displayed on this page are provided by PrimeLocation to give an indication of potential running costs based on various data sources. PrimeLocation does not warrant or accept any responsibility for the accuracy or completeness of the property descriptions, related information or Running Costs data provided here.