Villa for sale in 21, Via Corsica, Forte Dei Marmi, Italy 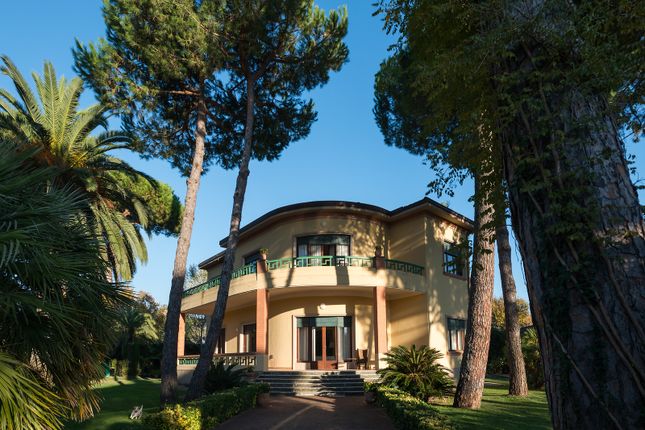 This famous Italian villa was built in 1936 and it's located in the Roma Imperiale district in Forte dei Marmi. It's reputed a typical example of the "Mediterranean rationalism" style.
The entrance avenue marks the perfect diagonal of the square of the lot, penetrating the house and signaling its entrance also emphasized by the staircase and the continuous balcony. The whole volume is articulated fluidly without offering the possibility of finding a main facade. The lines break several times, curve, become a balcony, bend again; the external envelope forms a volume that becomes smooth plaster (today spray finished), slender terracotta pillars and window sills, continuous glazing, half-timbered wood.

Outside, in the large garden surrounding the villa, there is a wooden gazebo designed by Castelfranco inspired by the oriental pagodas with wicker chairs with a metal structure always coming from the villa Ottolenghi Wedeking, and finally a fountain - sculpture with four compartments on a square pillar in painted concrete - by the futurist Ernesto Michahelles In honor of Taylard.

The organization of the internal spaces has the generator element in the stairwell which determines a space on the ground floor now used as a dining room, but originally it was a secondary entrance to the house. In the curved part of this floor there is a French door and, at the landing height, a window similar to the opening of the ground floor. The rounded shape of the stairwell and the secondary entrance corresponds on the facade to a cylindrical volume enriched by an external marble staircase with a curved iron tube railing and a particular canopy in iron and glass with a semi-elliptical shape. Together with the rounded frames, existing in all the elevations, these elements give a strong late-decò taste to all this front.

The living room on the ground floor and the staircase-dining room are separated by a large glass door with several doors which, if open, gives the possibility to the living room to expand and the large rounded shape of the living room to relate to the other of the dining area. On the ground floor, on the right with respect to the stairs, there is a guest suite consisting of a very large bedroom, a bathroom and a hallway. The whole portion of the existing building on the ground floor, to the right of the stairs, is intended for service areas and for servants. These are rooms organized around a corridor, open to the outside, and consist of a kitchen, a double and a single bedroom, a small bathroom with shower and a dining room.

Kitchen and dining room have been recently restored with great attention to the original project by Pietro Pescarolo.

All the floors on the ground floor are in colored concrete tiles and a fine grit of cm. 20x20, produced by the Tessieri company of Lucca, excluding the service areas which have (except the dining room) a sown floor cast on site. On the first floor the stairs lead to a rather large hallway organized like a real room. To the right, another hallway distributes two very large bedrooms and a bathroom. Currently one of these two rooms is used as a study. In the other portion of the first floor, completely analogous to the corresponding part below, a bedroom has been created in the room with the curved wall, perhaps originally a study. A balcony with a half-timbered wooden parapet marks the whole curved part of the perimeter wall. We still find, on the first floor, the grit floors produced by the Tessieri company, except in the study where a mat carpet was applied.

Property descriptions and related information displayed on this page, with the exclusion of Running Costs data, are marketing materials provided by Classe Milano, and do not constitute property particulars. Please contact Classe Milano for full details and further information. The Running Costs data displayed on this page are provided by PrimeLocation to give an indication of potential running costs based on various data sources. PrimeLocation does not warrant or accept any responsibility for the accuracy or completeness of the property descriptions, related information or Running Costs data provided here.