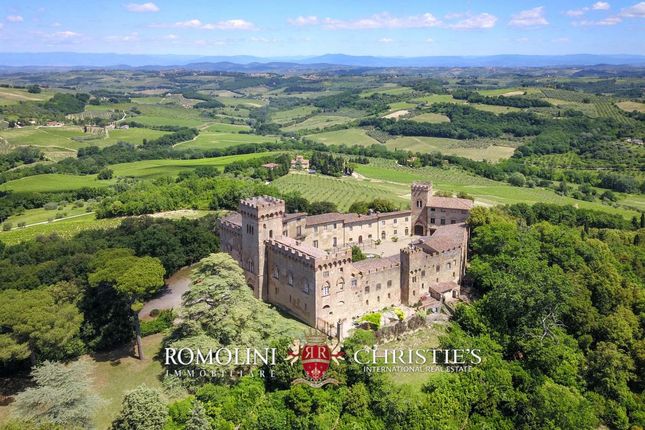 Tuscan Castle For Sale In Chianti, Vineyards Near Florence And Siena

Exclusive 85.6-hectare wine estate with medieval castle and private chapel for sale on the Chianti Hills, just 30’ from Florence The imposing (2,400 sqm) revolves around a central courtyard and houses 25 bedrooms for guest accommodation. The vineyard (roughly 12.0 ha, mostly Chianti DOCG) allows producing up to 150,000 bottles of wine, but one could easily reach 300,000 by planting new vines.
Halfway between Florence (35 km) and Siena (48 km), it is located in a secluded but at the same time easy accessible location, only 1 km from the nearest village with shops and 11 km from Certaldo, picturesque Etruscan town.

Description of buildings
Arranged around an internal courtyard, ideal location for events, this stunning castle (2,400 sqm – 25,824 sqft) is disposed on four floors, plus a panoramic tower boasting a breathtaking view over the Chianti hills. On the ground floor there are cozy sitting rooms and living areas, professional kitchens, rest rooms and storages.
On the mezzanine, first and second floors there are sitting rooms and bedrooms. Nineteen charming bedrooms with en suite bathroom are currently used as guest accommodation (inside the castle there are a total of 25 bedrooms and 33 bathrooms).
Just outside the walls of the castle, there is a beautiful Romanesque-style church usable for private ceremonies.

State and finishing
The castle is first mentioned in a document of 1020 ad which ratified the sale of the castle (together with other properties). In 1085 ad the castle changes owner again, ending up first as property of the local priest and then (in 1126) as possession of the Florentine Vescovado During the 13th century the castle is handed over to the Gianfigliazzi family (famous usurers also remembered by Dante in his Inferno with the verses “And as I gazing round me come among them, / upon a yellow pouch I azure saw / that had he face and posture of a lion”) probably as a payment for a debt.
The castle remained in the hands of the Gianfigliazzi family until November 25,1312: Besieged by the Imperial forces, the fortress was captured by Baldwin of Luxembourg (brother to the German emperor Henry VII and archbishop of Trier). In the following centuries the castle changed owners numerous times until 1987 when it was bought by the current owner.
The castle was then finely and attentively restored and boasts all those traits typical to Tuscan countryside buildings: Terracotta floors, wooden beams, stone walls and stone fireplaces are the most notable. The imposing ramparts of the castle are worth a mention, since they are still today in excellent shape.

Exteriors
Surrounded by vineyards and olive grove, the property is immersed in the Tuscan countryside of Chianti and covers a total 85.6 hectares (211.5 acres)
The vineyard (12.0 ha) is mostly registered as Chianti DOCG (10.0 ha) with a small portion of Toscana igt (2.0 ha) and is made up of Sangiovese, Malvasia, Trebbiano, Canaiolo and Colorino vines. Yearly production ranges between 75,000 and 150,000 bottles, but one could increase this numbero to 300,000 by converting further 15.0 hectares of arable land into vineyards.
The olive grove (3.0 ha) has only Leccino trees and could produce, in good years, up to 4,000 kg of extra-virgin olive oil.
The remaining surface is entirely covered by courtyards (0.5 ha), woods (35.4 ha) and arable land (34.7 ha) with the possibility of planting more vines and/or other crops.

Use and potential uses
Producing farm selling its vine grapes, olive oil and Vin Santo, the estate includes the castle, currently running as accommodation business, but ideal also as representative residence.
The property has no cellar at the moment, which means that grapes are processed in other places.

Property descriptions and related information displayed on this page, with the exclusion of Running Costs data, are marketing materials provided by ROMOLINI - CHRISTIE'S, and do not constitute property particulars. Please contact ROMOLINI - CHRISTIE'S for full details and further information. The Running Costs data displayed on this page are provided by PrimeLocation to give an indication of potential running costs based on various data sources. PrimeLocation does not warrant or accept any responsibility for the accuracy or completeness of the property descriptions, related information or Running Costs data provided here.