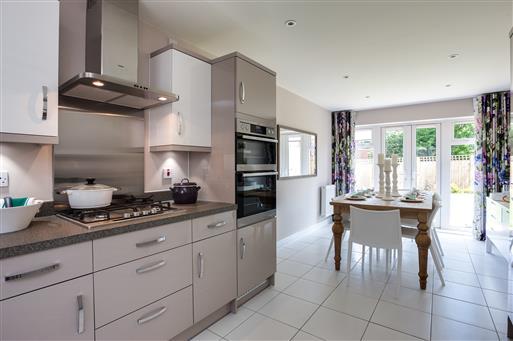 Welcome to Bellway at QEII

Bellway at QEII is a striking development of new homes in Welwyn Garden City, which is located around five minutes’ drive from the town centre. This collection of apartments and houses is offered in a range of styles, designed to appeal to a variety of audiences, including families, first-time buyers and commuters working in central London, 25 miles away.

The development is characterised by its large, open spaces, which echo the rural ambience of the surrounding woodland. All apartments include allocated parking, while all houses have garages, or parking, and private gardens. A quality specification, together with contemporary design features – such as open-plan living spaces, en suite bathrooms and integrated kitchen appliances – can be found across the product mix.

Situated around 20 minutes from London by train, Bellway at QEII is ideal for professionals commuting to the capital. Residents have the choice of two railway stations – Hatfield, or Welwyn Garden City – both around two miles away and both with frequent services to Potters Bar, Finsbury Park, Old Street, Moorgate and London Kings Cross. Major roads nearby include the A1, for travel to London and the north, and the A414, for Hertford, Harlow and Chelmsford to the east, and St Albans and Hemel Hempstead to the west. Journey times to central London are around 50 minutes via the A1.

For families, there are a number of well-regarded schools in the local area that cater for primary and secondary-age pupils. Commonswood Primary and Nursery School is a 10-minute walk from these new homes in Welwyn Garden City, while Creswick Primary and Nursery School is less than 20 minutes’ walk away and Stanborough School can be reached in around five minutes by car. Post-16 education providers include Oaklands College, which has a campus less than three miles from the development, and the University of Hertfordshire, 10 minutes’ drive away.

Welwyn’s main commercial district is focused around the Howard Centre mall and its surrounding streets, such as Stonehills, Howardsgate, Parkway and Fretherne Road. Here familiar chain and department stores sit alongside independent and specialist retailers offering a wide range of goods. The Galleria at Hatfield is also popular with shoppers. This outlet mall is home to more than 80 stores, as well as restaurants and cafés, all less than 10 minutes’ drive from the development.

For movie fans, the Galleria has a multiplex cinema that shows the latest releases and blockbusters, while Welwyn Garden City Cinema in Welwyn town centre screens arthouse films and world cinema. Performance venues include The Hawthorn Theatre and the Barn Theatre, both of which stage regular dramatic, musical and family productions.

Properties in this development

See all property from this developer