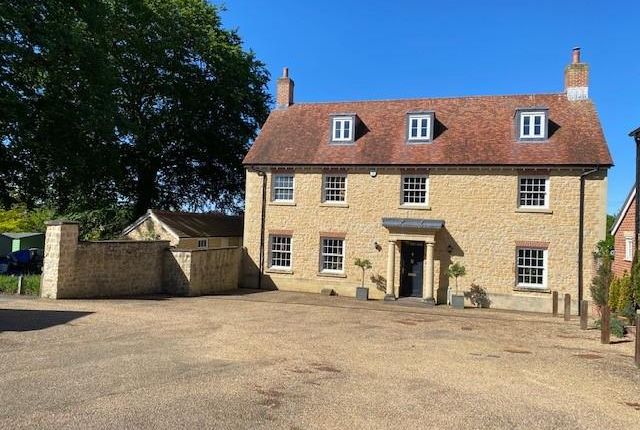 Built in 2014, Abbotts Court is a square of five Georgian-style town houses built to a very high standard of cut local stone with brick detailing above sash windows and slate roofs. The five houses all look inwards onto the square and 5 Abbotts Court is the largest and only detached one of the five. It occupies the south-west side of the square with its rear, part-walled garden, which was originally an orchard, set above neighbouring properties below and with lovely, countryside views in the distance beyond the rooftops of Sherborne. The house bears all the hallmarks of a classically designed family house in the Georgian period. It has a colonnaded porch and well-proportioned rooms with excellent ceiling height arranged around a centrally positioned reception hall, that rises through a deep stairwell past the galleried landings on the house's two upper floors. Many of the rooms have windows on two sides and this coupled with the
house's position means that the interior has a wonderfully light and airy feeling. Pale oak has been used for the staircase and the flooring in the hall and sitting room and there are several built-in cupboards and wardrobes. The sitting room is generously sized with a fireplace fitted with a wood-burning stove and French windows leading to the conservatory, which overlooks the garden. The dining room too has a woodburning stove and south-west facing view onto the garden. The kitchen/breakfast room is fitted with oak-fronted units under granite work surfaces, central island, Welsh dresser and a Mercury gas and electric range cooker. The first floor has four double bedrooms, three of which have distant countryside views and both the principal and guest bedrooms have en suite shower rooms, with the other two bedrooms sharing the family bathroom. The second floor occupies the roof space and incorporates a landing with under-eaves storage, two further double bedrooms, shower room and storage room.

The square incorporates communal garaging under sympathetically designed car ports, within which No.5 has two reserved spaces about 25 yards across the square from the house. There is also additional ample parking for up to about five cars immediately in front of house. Running along one side of the house is a paved path with access through a pedestrian gate to the square. Beside it is a separate, stone-built outbuilding divided into three storerooms that currently serve as a workshop, larder/wine store and log store. The garden extends out on two sides of the house and amounts to about 0.3 acre (0.12 hectare). It is bound on two sides with close-boarded fencing with a post and rail fence with maintenance strip on the side facing the rear of the house. The garden incorporates a gently sloping lawn dotted with old apple trees and richly planted herbaceous and rose borders. At the rear of the house is a paved terrace fringed with dwarf walling, with a stepped path leading down to a timber-built garden store. On the northern side of the house are a compact kitchen garden that incorporates a tall, south-facing brick wall for fruit cultivation and a greenhouse.

5 Abbotts Close is positioned at the end of a no-through lane about five minutes' walk from Cheap Street, Sherborne's main shopping street, where there are a wide range of shops including a Waitrose supermarket that cater for most day-to-day requirements. The town also has a selection of local businesses including medical, dental and veterinarian surgeries. For wider needs larger towns within a reasonable driving distance include the regional centre of Yeovil and the county town of Dorchester. Sherborne also has a direct train service to Waterloo (2.25 hours) and there is a fast train service from Castle Cary to Paddington (90 minutes). Other transport links include Bournemouth, Bristol and Exeter Airports, which are all easily accessible, the A30 passes through Sherborne and the A303 is also close by. The town and local area are also blessed with a wide selection of popular schools to choose from. The Gryphon School (state secondary) and three highly rated independent schools are in the town itself, whilst Leweston, Hazlegrove, the Bruton
Schools and Perrott Hill are all within a 12 mile radius.

Property descriptions and related information displayed on this page, with the exclusion of Running Costs data, are marketing materials provided by Knight Frank - Sherborne Sales, and do not constitute property particulars. Please contact Knight Frank - Sherborne Sales for full details and further information. The Running Costs data displayed on this page are provided by PrimeLocation to give an indication of potential running costs based on various data sources. PrimeLocation does not warrant or accept any responsibility for the accuracy or completeness of the property descriptions, related information or Running Costs data provided here.

See all recent sales in DT9