Up the church steeple, down in the dungeon, out on the river or inside the lighthouse; some people choose the strangest abodes. If you fancy joining them, here’s a guide to the pick of the property oddities currently (or recently) on the market. 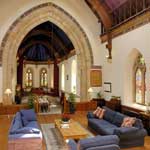 The Lord's my surveyor

Ever since the Church of England decided that it needed to slim down its property portfolio, opportunities to move into the local place of worship have cropped up frequently. Some have been split into apartments whereas others, like St Nicholas Church House in Kyloe, Northumberland (built in 1792), have been converted into single properties.

"I've seen quite a few church conversions, but nothing as nice as this," says Barbara Pentecost (really) at Smiths Gore in Berwick-Upon-Tweed. "It's quite exceptional." The clean, light stone construction hosts a beautifully-proportioned interior, with exquisite stained glass windows, a lovely wooden staircase and four storeys up the tower at one end, leaving half of the ceiling at full height. 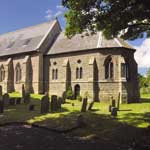 The current owners had to apply to the Church Commission for permission to remove some of the gravestones to make a garden (the church was decommissioned in 1983) and you have views over the island of Lindisfarne. The five bedroom, two bathroom property is on the market for £650,000.

Down in the West Country, two redundant Methodist chapels are up for auction, at far more affordable prices: one at Melksham Forest has a guide price of £100,000-£100,000 and another at Broughton Gifford is on at £80,000-£120,000. Both come with their adjoining halls and are offered by Dreweatt Neate in Swindon and Wells. 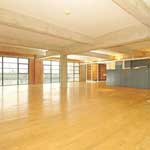 All kinds of urban spaces have found themselves pressed into service as living quarters, from factories to shops to schools. Although the peak of the loft conversion phase has passed, there are still some stunning prospects on offer.

The redevelopment of Kings Cross, with the launch of the Eurostar terminal at St Pancras and its dramatic ripple effect on the surrounding district has produced a new wave of loft options. York Central, for example, on York Way - next to the new Guardian newspaper building - includes this 2,400 sq ft apartment with a 42ft reception room, exposed brick, concrete beams and views over London. All for £1.6 million. 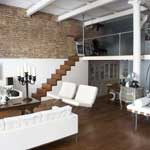 South of the river, the Alaska Building on Grange Road contains this open plan studio loft with architecturally-designed features, floor to ceiling windows, a wooden free standing bath and 'huge' sleeping area, say the agents. Everything you would want in a 21st century pad, for £535,000.

Nostalgic for school? Why not try The Lycee in Kennington, where this 1,600 sq ft apartment with double height ceilings, tons of natural light and large open plan dining area is on the market for £625,000. There is also a daytime caretaker (just like school) available during the week. 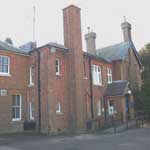 A kooky place in the country

Seekers after the peculiar place in the country are spoilt for choice in Britain. Like Caractacus Potts living in his windmill or the Old Woman who lived in a Shoe, there is a romance and endearing eccentricity about odd spots.

Today in Petworth, Sussex, you can put in an offer for the old police station, replete with cells and the counter where many a plod has taken down particulars. Offers are invited by Smiths Gore for the unconverted 5,300 sq ft property, on the site of the 'old Petworth House of Correction', which must surely appeal to some potential buyers.

Knight Frank, meanwhile, has accepted £500,000 for a 12-bedroom, four-bathroom former care home in Swindon called Redlands. A mile and a half from the mainline station, the mid-19th century building will be converted into homes, providing the buyer receives the necessary planning consent. 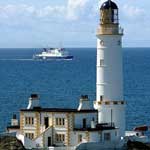 Right at the edge of the west coast of Scotland, the Corsewall lighthouse remains in service as a warning for ships approaching the mouth of Loch Ryan. The complex beneath it, meanwhile, was converted into a hotel in 1995 and is now up for sale, at £1.25 million. This includes a medium-sized restaurant, six rooms and five refurbished cottages. There are views over Arran, Ailsa Craig and the coast of Ireland.

The British appetite for houseboats and narrowboats is long established, with whole communities thriving along our rivers and canal-sides, living in various states of comfort, repair and sophistication. You can spend as little as £10,000 for a basic shell of a craft, leaving yourself a good deal of work to fit it out as a dwelling. Or you can pay anything up to £250,000 or more for a fully-functioning, high-spec houseboat with an attractive and popular mooring, electricity, plumbing etc.

Recent offers include a newly built 40 ft by 10 ft houseboat moored near Beverley in the Yorkshire Wolds, with one bedroom, lounge and kitchen, for £37,000. You get to it via a ten minute walk along the riverbank. Or else there is an 80 ft by 28 ft alternative on sale in Kent for £210,000, including three bedrooms, double glazing, central heating and a large garden. Both craft are advertised on Apollo Duck.

"The best thing was that it was very cheap," says Laura Sturgess, who lived on a narrowboat with her family for four years. "We liked being able to move around and we lived in some really beautiful places. Once we had some woodland all to ourselves. We would pee outside and swim in the river." 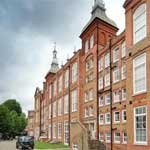 When you're looking for these kinds of properties on Primelocation.com, try using the keyword search facility. Search for UK property for sale and enter words like castle, houseboat, mill/windmill/watermill, barn, warehouse, church or oast house and see what pops up.