History through the back door

The UK's most famous house historian reveals the secrets she has unearthed while researching some of the nation's most fascinating homes.

This month: Melanie looks at homes with an artistic past.

As historian for Chesterton Humberts, I research the history of houses all over the country; delving behind the facade to uncover the mysteries of their past. And researching the history of a house will always reveal a story.

London has an abundance of houses with an artistic past. The artists' studios of Talgarth Road are some of the most recognisable studios in the city. Built in 1891 and originally named 'St Paul's Studios' they feature the most striking large round-headed windows. No.143 was the home of William Logsdail, remembered for his scenes of London, including St Martin-in-the-Fields now in the Tate Gallery, and George Kruger Gray, a coin and insignia artist who designed the Great Seal of King George VI.

Chelsea Studios in Fulham is made up of two early Victorian homes and a collection of 1920s studios. The studios became known as 'The Italian Village' and were the creation of sculptor, Mario Manenti. One of the Victorian houses was the home of John William Godward, an artist often compared to Frederic Lord Leighton, and whose work is displayed in galleries across the world, including Paris, New York and London.

In the heart of South Kensington, No.25 Wetherby Gardens (pictured, right) was designed by Colonel R.W. Edis, who was also responsible for additions to Sandringham. No.25 was commissioned for another artist with royal connections, Sir Joseph Edgar Boehm, who created his own designs for the house.

Boehm was a celebrated sculptor, whose works include the Duke of Wellington and Benjamin Disraeli. Boehm was so favoured by Queen Victoria he received over 40 royal commissions.

No.2 Cheniston Garden Studios, built in 1882, is tucked into a quiet corner in Kensington and was the former home of Harrington Mann, portrait artist to the upper classes. Mann was responsible for a number of royal portraits, including King George V, which was exhibited at the Royal Academy in 1932.

In north London I stumbled across an artist living a few doors down from Ernö Goldfinger in Hampstead. Peter Peri is a Hungarian sculptor who moved to Willow Road during the 1930s and is most noted for his sculptures in concrete. Peri's mural, The Sunbathers, was displayed at the Festival of Britain in 1951. 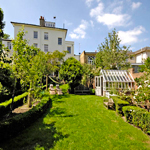 Lastly, one of my favourite discoveries was the story of the artists of No.47 Downshire Hill (pictured, left). Since it was built in 1820, it has been the home of Gaetano Meo and John Heartfield, but it was in the early 20th century that the Carline family made this house so significant. The Carline's, including Sydney, Richard and Hilda, created an open house for artists who became known as 'The Hampstead Circle'. The artists included Sir Stanley Spencer (who married Hilda), as well as Mark Gertler, Paul Nash, Robert Bevan and Gilbert Spencer.