Private view: The £29.5m Hampstead villa that sold in a matter of weeks

It's been clear for 18 months how the Prime market, particularly in London and South East, is still in the rudest of health. Nigel Lewis went to visit a house that's sold exceptionally quickly 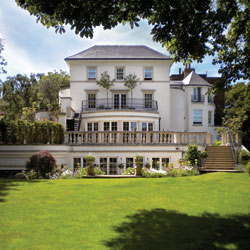 The original reason for my recent visit to Whitestone House was to report on a house for sale that's one of London's most intriguing and expensive house restorations. But, not long after my return, the property had found a buyer.

This is a good example of just how hot the 'super prime' property markets in London, the South East and other parts of the UK continue to be performing well despite the downturn.

And Whitestone House sold exceptionally quickly - in just oer a month - so what was it that attracted such a buyer so fast?

Perched on the side of a cul-de-sac opposite Hampstead’s famous Jack Straw’s Castle pub, its small entrance invites comparisons more with the doorway to a CS Lewis fantasy world than a home.

Lions, witches and wardrobes, nevertheless, are in short supply. Instead, after stepping over the threshold, you’re inside a recently and comprehensively rebuilt home with deep connections to British art and political history.

It’s also a killer location - according to agent Glentree International - and, to bring things up to date, owners who has ploughed almost ten years of their lives – and £9 million – into its restoration.

Built in the late Regency period, Whitestone House has been owned or visited by some of the world’s greatest artists including poet and painter Dante Gabriel Rossetti, landscape artist Henry Mark Anthony and suffragette Beatrice Harraden.

But it is painter John Constable, famed for his 1821 painting The Hay Wain, who is the best-known connection to this property.

Constable, who lived nearby at two addresses (on Upper Street and Heath Street) during the 1820s, worked in the studio that once stood at the end of Whitestone House’s garden, proof of which are the three paintings of Hampstead Heath by him owned by the Tate in London.

The Vale of Health

Constable’s fondness for this garden is easy to understand. Stand in front of the house and you’re overlooking the Vale of Health, a narrow and wooded valley to the south-west of the heath. It's an unusual vista in London’s super-cramped postcodes.

But what Constable wouldn’t appreciate if he were alive today is that the house has been almost totally rebuilt in recent years. Quietly-spoken American Fred Kaufmann and his wife bought the house in 2002 (pictured, left) from an elderly couple who had owned it since 1948 (and paid £14,500 for it originally).

“When we moved in the biggest surprise was to discover a large cellar accessed through a trap door hidden underneath the lounge carpet,” says Fred.

The Kaufmanns then started on much-needed renovation and underpinning work but, as the builders set to, the structure began to crack and slide down the hill.

“We soon realised it would need rebuilding from the foundations up so five years after moving in I decided to quit my job as a City lawyer and banker and project-manage the rebuild myself,” says Fred. “The house had begun to consume both mine and my wife’s life so it needed someone to get more hands-on.

“But apart from some experience in stone carving and painting as a student, and extensive travels around Europe and its architecture to inspire me, I had no experience.”

Fred says he wanted to rebuild the property using the technology available today that Regency architects would have yearned to have access to then; an example being its ‘floating’ staircase (pictured, right), the indoor swimming pool – which is underneath the public road at the property’s front – and the unusual, bespoke-made curved front windows. 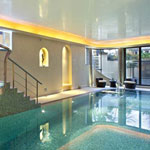 The Kaufmanns also then dug out the basement, added an indoor swimming pool and pretty much, except one wall, rebuilt the property as an exact replica of its former self.

“We had the full and very helpful cooperation of the local planning dept and the only challenge was to persuade local preservation enthusiasts that our plans were true to the spirit and design of the original building – but we managed to persuade them about that,” says Fred.

“A lot of people here are nervous about the modern, glass-and-steel affairs that you see built on the other end of the heath, and which would not be appropriate here."

The lower ground floor, which used to be the basement, includes a staff bedroom, kitchen and enormous family. Its ground floor, which incorporates the formal drawing room, entrance hall and a dining room then leads upstairs to a master bedroom and, on the second and third floors, five more bedrooms.

But after pouring most of their money, energies and time into such a huge and personal project, why are the Kaufmanns selling up?

Fred says it’s time to return to his native country and a new life in California. So, would he do it all again back in the US? His 100-yard stare into the middle distance on being asked this question probably means, not.