Detached house for sale in Huntsland Lane, Crowley Down RH10 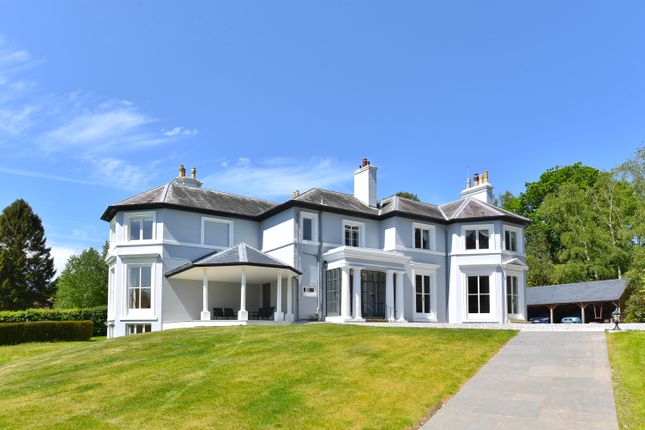 This amazing property is located in the rural setting and very conveniently located - only 10 minutes from Gatwick Airport, but without aircraft noise as it is not on a flight path. The train from Gatwick to London Victoria only takes 30 minutes, or alternatively trains to London Bridge, Victoria, and Brighton are also available from the nearby Three Bridges station.

Huntsland House was built for entertaining. With a ballroom, snooker room, cinema room, gym, wine cellar, pneumatic lift, covered swimming pool, garden party lawn, and recently dredged lake, this is a building designed to impress. With 6/9 bedrooms, 7 bathrooms, and a 4 bay garage, it provides ideal accommodation for family or for friends visiting over long weekends.

It is a fabulous example of Georgian and Victorian architecture with an imposing facade and distinct internal features such as symmetrical bay windows, original wooden shutters, and a cantilevered spiral stone staircase. The house has recently been renovated with new wiring, new plumbing, engineered oak floors, modern standards of insulation, and underfloor heating throughout.

The house is located high on a ridge with fantastic views across the unspoilt Sussex countryside, and is surrounded by approximately three acres of garden which include an enviable collection of mature copper beech, oak, and yew trees.

It is accessed via the private lane of the former Huntsland Estate, on the outskirts of Crawley Down village which has local amenities such as shops, post office, pharmacy, doctor, surgery, and a dentist. The larger town centres of Crawley and East Grinstead are approximately 6 miles away, and nearly private schools include Brambletye, Ardingly College and Worth School.

The local area includes a number of National Trust properties such as Standen, Nymans, and Sheffield Park, together with other significant gardens such as Wakehurst Place, High Beeches, Borde Hill, and Leonardslee. Dining out is available at a number of local country house hotels such as Alexander House and Gravetye Manor, there are also a number of local golf courses, polo and showjumping at Hickstead, and horse racing at nearby Lingfield Park.

The history of huntsland house

Property descriptions and related information displayed on this page, with the exclusion of Running Costs data, are marketing materials provided by Capital Estate London, and do not constitute property particulars. Please contact Capital Estate London for full details and further information. The Running Costs data displayed on this page are provided by PrimeLocation to give an indication of potential running costs based on various data sources. PrimeLocation does not warrant or accept any responsibility for the accuracy or completeness of the property descriptions, related information or Running Costs data provided here.

See all recent sales in RH10