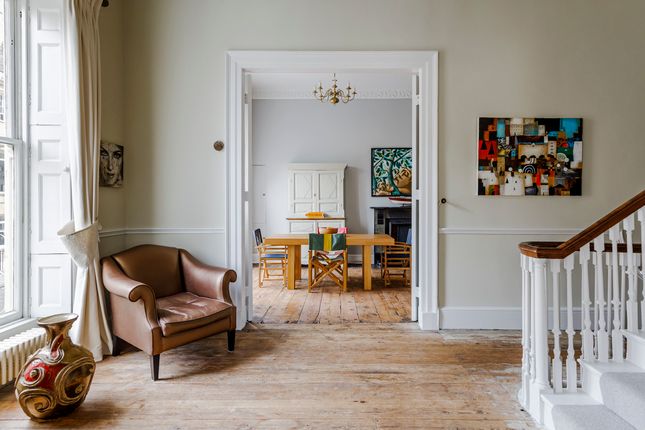 This outstanding Grade ii-listed double-fronted house occupies a highly sought-after position on the corner of one of Bath’s most notable streets. Set over five elegant storeys and containing five bedrooms, total internal accommodation extends to over 5,500 sq ft and features countless historic architectural details, including fine plasterwork, joinery and stonework. The house is set off The Circus and opposite the Assembly Rooms; however, it is remarkably peaceful for such a central location. Bathed in a beautiful south-westerly light, the house has a brilliant and highly versatile plan. In addition to the main accommodation, there are self-contained quarters on the lower ground floor with independent access.

The houses on Russell Street were constructed by John Wood the Younger from the ubiquitous honey-coloured limestone ashlar with Welsh slate mansard roofs and large box sash windows. This house is exceptional in the uniqueness of its corner position, facing southwest with expansive street-facing elevations. For more information, please see the History section.

Set behind original wrought-iron railings at street level with elegant balconettes at first-floor fenestration, the house has an unusual wide-set entrance porch with a large canopy above. The generous entrance door is set below a cobweb fan light, with the original ‘snuffer’ still in place; originally used to extinguish flaming torches before street lighting was introduced in the early 19th century.

Opening to the private central hallway, the remarkable proportions of the interior are immediately obvious; the cantilever staircase rises directly ahead and forms an elegant spine connecting all floors. Original Georgian floorboards are left exposed here and in many of the house’s rooms, while all the spaces within are painted in assorted chalky hues. Georgian six-panel interior doors and marble chimneypieces feature throughout. Remnants of earlier gas light fittings are scattered throughout the house, first installed in the latter part of the 19th century, and the incredibly rare whistle pipe system survives (a form of pre-electricity communications that gave rise to the term ‘on the blower’), connecting the first-floor drawing room to service rooms on the lower-ground floor.

The house has three wonderful reception rooms on the lower-ground, ground and first floors. The ground floor reception room has handsome fielded panelling paired with elegant cornicing. The more intimate fourth reception room lies opposite, currently used as a study. At the rear of this floor is also a spacious boot room and a guest WC.

The piano nobile is home to the kitchen, dining and drawing room. All spaces have dramatic ceiling heights and particularly fine plasterwork. Wedding doors open from the spacious landing to both principal rooms, and the quality of natural light on this floor is remarkable. The kitchen features panelled cupboards painted matt lead-grey, with pale quartz resting atop. An island unit is positioned centrally, and appliances include a Rangemaster stove with induction hob and double fridge freezer units by Gaggenau.

The second floor is home to two large bedrooms and a spacious dressing room with fitted cupboards. The larger bedroom has fine views of Bath Abbey in the distance and a spacious en suite bathroom. A further shower room and separate WC are located off the landing. At the apex of the house are three further bedrooms, a dressing room and a bathroom, with a generous loft space above and enjoying further excellent views of the Bath cityscape beyond.

The lower-ground floor is a brilliantly versatile space and can either connect with the main house or be separated entirely to provide independent ancillary accommodation. The hallway and living spaces have original flagstone floors. Unusually for a lower-ground floor, the quality of light is excellent, care of generous lightwells that surround the entire south and west aspects. Entry is either through the front door to the spacious hallway or via the rear staircase that connects to the main house.

The house’s original kitchen room is now used as a spacious living and dining room, with double open hearths and a bank of original cupboards along one wall. A rare sauce stove is still in place and has a separate Historic England listing; it is believed to be one of only three remaining in the country, with a known example also in place at Hampton Court Palace. The kitchen itself is set in a spacious interior vault, with a breakfast area in a second adjacent vault. There is also a bathroom and additional separate WC on this floor.

The courtyard wraps around the south and west aspects of the house. Attractively styled with planters and trellis, it catches the best of the Bath sunlight. There are private entrances on the lower-ground floor, two separate storage vaults and steps up to Bennett Street, behind a private cast-iron gate. Two exterior vaults set beneath the street pavement provide additional storage.

Bath is well served by outstanding retailers and restaurants, with a particular focus on independent provisors. Colonna and Small’s, Beckford Bottle Shop, Cafe Lucca, Corkage, Landrace Bakery and the weekly Farmer’s Market are of particular note, while the Olive Tree restaurant, Bath’s only Michelin-starred establishment, is conveniently located at the northern end of Russell Street itself. The city’s cultural distractions are plentiful, with brilliant theatres and galleries; the Holburne Museum, the Fashion Museum (directly opposite Russell Street) and The Edge arts centre all hold world-class exhibitions.

The green space of the aforementioned Circus is less than a minute away, while nearby Royal Victoria Park provides a further and wonderful green expanse and is home to the revered Botanical Gardens. The National Trust Skyline Walk to the east of the town centre offers exceptional views through six miles of local meadows and ancient woodlands. For further adventures in nature, the Cotswold Way lies directly to the north of Bath, and myriad walks and hikes are available in the greater surrounding Somerset countryside.

Transport links are excellent, with Bath Spa train station at the southern edge of the city centre – around a 15-minute walk from Russell Street – providing a direct line to London Paddington in under 80 minutes. The M4 motorway lies to the north of the city and is quickly reachable by car in just 15 minutes, while Bristol airport is less than 20 miles away, or 35 minutes’ drive. 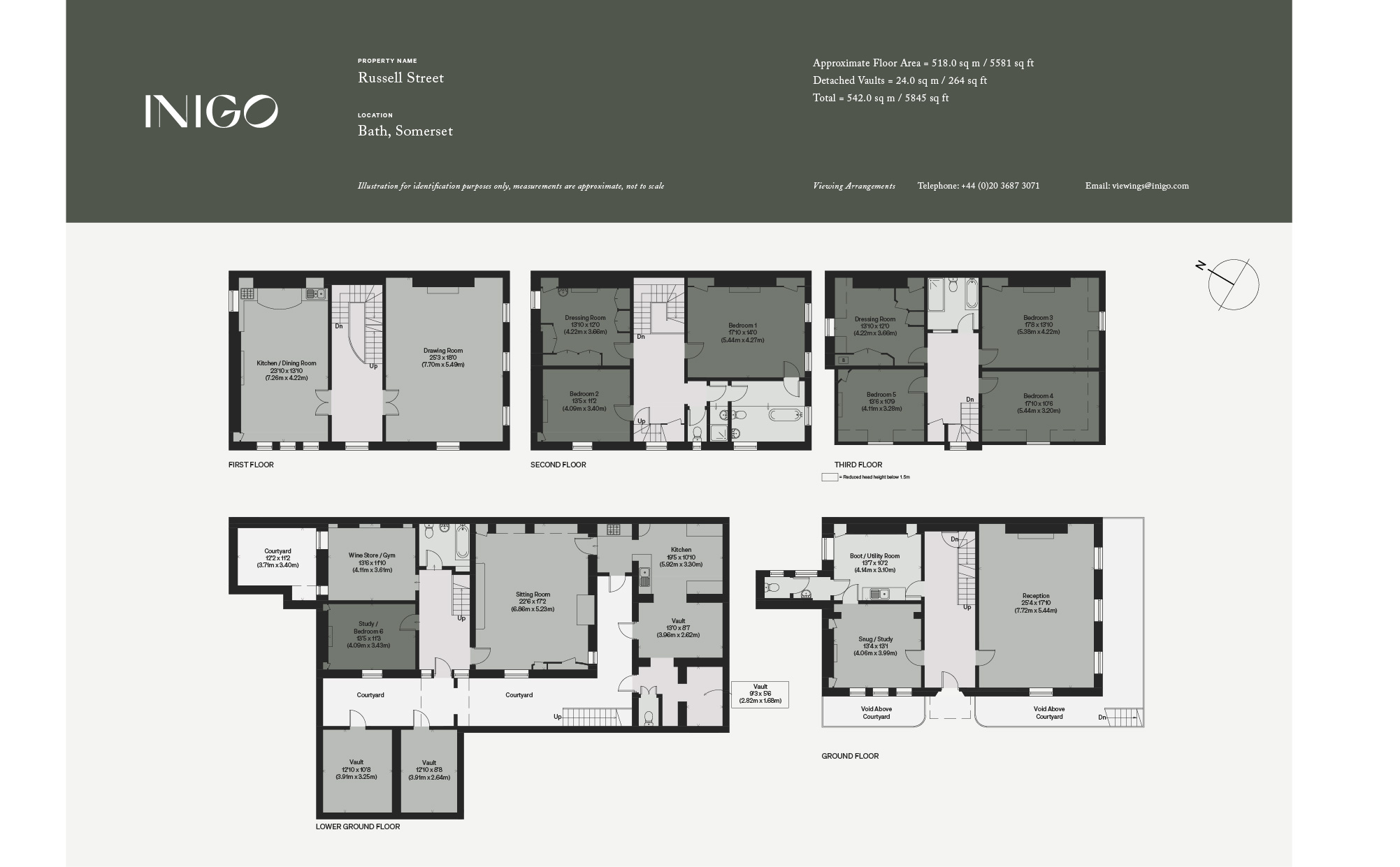 Property descriptions and related information displayed on this page, with the exclusion of Running Costs data, are marketing materials provided by Inigo, and do not constitute property particulars. Please contact Inigo for full details and further information. The Running Costs data displayed on this page are provided by PrimeLocation to give an indication of potential running costs based on various data sources. PrimeLocation does not warrant or accept any responsibility for the accuracy or completeness of the property descriptions, related information or Running Costs data provided here.

See all recent sales in BA1