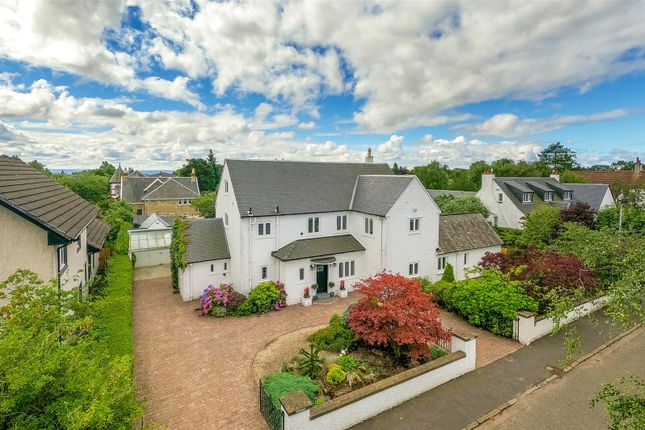 • A highly impressive, Detached House (1925).
• Later extensions ensure an outstanding family home.
• In the prized location of Thorn district and in Conservation Area.
• Amidst a beautiful, south facing, garden of approximately 1/3 acre.
• Exhibiting a very impressive modern specification.
• Immaculately maintained and very tastefully decorated.
• Four Public Rooms plus Home Office and six Bedrooms.
• Ensuite Bathroom, two Shower Rooms, Guest WC.
• Superb Kitchen, by Alno, with four oven Aga.
• Utility Room with Pantry.
• Double glazed (mostly 2018), bi-fold doors (2010), Sitting Room windows/ French door (1991).
• Gas central heating, alarm.
• Large Double Garage plus Workshop (or third Garage), Double Car Port.
• Main roof and garage re-slated (2017 and 2020 respectively).
• Facility for ‘Granny Flat’ or ‘Teenager’s Wing’.
• Fantastically convenient for Bearsden Cross.
• Tenure – Freehold
• EPC – Band D
• Council Tax – Band H
Bearsden is a highly desirable area in which to live and within it the Thorn district is undoubtedly one of its most sought after.
Rossendale is a pre-war Detached House dating from 1925 with later additions – firstly a ‘West Wing’ that added the TV Room (which combined with the Home Office, Inner Hall and Shower Room has the capacity to be a self-contained relative/teenager’s wing) and much more recently (2010) the superb open plan Living/Dining Room at the rear of the house featuring bi-fold doors to the back garden and a large lantern style glass roof light.
Our clients have owned Rossendale for twenty-two years and over that time have constantly maintained and improved the house. As detailed above, they have also extended the house which, together with the renewal of the Kitchen (2010), has created that key family space of the open plan Kitchen, Dining Room (both formal and informal) and Living Room. All sanitaryware, except the retained period suite in the ensuite Bathroom, has been renewed. The bespoke cabinet makers Neville Johnson were commissioned to make the handmade staircase balustrade, in natural hardwood sapele in 2018 to match the sapele floor of the Reception Hall and Sitting Room – truly lovely work. As detailed earlier, the windows were renewed largely in 2018, by Anglian, with the windows, bi-fold doors and roof light in the Living/Dining Room extension done earlier in 2010. The double-glazed bow window, bay windows and French door, in the Sitting Room date to 1991 and are by Everest. Central heating is mains gas with a two-boiler system (one for ground floor, and one for the first and second floors). These were renewed in 2014 and 2016 respectively, all controlled by Nest Digital Thermostat/Controller. Both are regular condensing boilers, the upper floor boiler heating the hot water cylinder. The house is alarmed.
As one can see the subjects are beautifully presented and decorated with floor coverings including the hardwood sapele (Hall and Sitting Room); Pergo (Home Office, Inner Hall, TV Room and Bedrooms 1,2 and 3); modern grey carpet (stairs, first and second floor Halls, Bedrooms 2,5 and 6); tile (formal Dining Room, Living/Dining Room, Kitchen, Utility, Pantry, Boiler Store, ensuite Bathroom and family Shower Room); quality grade laminate (WC and the Shower Room in the West Wing).
The garden is a delight and superbly planted and maintained. In all the plot is approx. 1/3 acre. There is an abundance of specimen planting. The front garden has the convenience of an ‘in & out’ driveway with the drive continuing to the east side of the house and leading to a double width Car Port, Double Garage and to the rear of this a sizeable Workshop (or third Garage if needed) to the back of which is a Tool Shed (Note: The windows in the Garage and Tool Shed are single glazed steel framed Crittall windows). The drives are finished in smart block paviours and provide off road parking for many cars. There is a rockery bed including a fine acer, and with a lawn to the front of the west extension.
The rear garden is more notable, larger, and a wonderful space. South facing, it captures the day’s sun and lies mainly to lawn. There are patios outside the bi-fold doors of the Living/Dining Room, in front of the TV Room and at a sheltered Pergola which has a brick-built barbeque. As with the front there are perimeter borders and beds all very well planted, another planted rockery and around the garden specimen shrubs and trees to provide interest throughout the season. It is enclosed and gated.
Outbuildings, in addition to the Garage Block, include a Summer House, Shed and a Lean-to Greenhouse to the rear of the Tool Shed. Power and light are installed within the Garage, Workshop, and within the Summer House. At the Car Port is a water tap.
In terms of the accommodation one can refer to our floor plan but it is summarised subsequently. For those who may need the facility of a ‘relative’s wing’ the Home Office, Inner Hall, Shower Room, and TV Room has provided such a facility in the past (Home Office becomes the Bedroom, TV Room has independent access via the French doors) for a previous owner.

• Reception Hall – With the Neville Johnson staircase. A section of wall has well built, and nicely designed, display shelves and cabinets.
• Sitting Room – With the 10-frame bow window, and French door, to the rear garden plus a bay window to the west. Stone fireplace with slate inlay and hearth and a real fire. Feature ceiling.
• Formal Dining Room – Open plan to the Living/Dining Room and with an open access to the Kitchen.
• Living/Dining Room – A more informal space, this is south facing and is the 2010 extension. Bi-fold doors, windows south and west and the feature of the large ‘lantern’ rooflight. A great space.
• Kitchen – An Alno German Kitchen installed in 2010 by Creative Design Kitchen Studio of Ayr. Units are contemporary in design and finished in walnut or aubergine colour. Grey Corian worktops and upstands are set against the walnut style cabinets and a walnut style worktop set against the aubergine cabinets, the latter including a circular drinks/dining bar. Central to the kitchen design is the aubergine coloured four oven Aga with two hobs plus two additional halogen hobs. Other appliances include an integrated larder fridge (tall) and a dishwasher.
• Utility Room – Featuring a stainless-steel commercial style sink with deep basin and two large side drainers. Plumbing for washing machine. Rear window and a double glazed UPVc door to the side.
• Pantry – A cool room with small side and rear windows. Fitted shelving.
• Boiler/Boot Cupboard – With a radiator installed and with boiler that services the ground floor.
• WC – Installed in 2018 and very smartly fitted including a ‘floating’ wash hand basin vanity unit.

• Home Office (Bedroom) – With window to the front.
• Inner Hall – Window to front.
• Shower Room – Upgraded twice, 2016 and latterly 2021. Once again, very smartly equipped with a contemporary suite. Concrete style wet wall panelling is very much in style. Electric shower (Mira Sport) in the enclosure.
• TV Room – French doors and windows to the rear garden. This would be the Lounge in the ‘Granny Flat’.

• The staircase ascends to a first-floor hall which has two windows to the front and two hall cupboards, one of which houses the boiler that services the first and second floors.
• Bedroom 1 – The principal bedroom with windows to the south and west. Fitted wardrobe provision in a corner of the room.
• Ensuite Bathroom – Retains the original pink suite (Art Deco style) with bath, wash hand basin and WC. There is then a modern shower enclosure by Makti within which is a powerful Mira Excel thermostatic shower.
• Bedroom 2 – Windows to the rear facing south. ‘Floating’ vanity unit with wash hand basin.
• Bedroom 3 – Windows to front and side.

• Bedroom 4 – Another double with east and south facing windows and a pedestal wash hand basin.
• Shower Room – The family shower room is contemporary in design again with a Makti shower enclosure with a further thermostatic shower featuring this time both Deluge and hand shower heads.

• The second floor is accessed via a staircase behind a door on the first-floor hall. A staircase leads directly into a second-floor hall with rear facing dormer window and an area that would accommodate space for a study area or indeed for some gym equipment. This level has two bedrooms and would make a great teenager’s level.
• Bedroom 5 – Gable window to the west. Triple width wardrobe.
• Bedroom 6 – Gable window to the east. Double width wardrobe and a built-in computer/desk nook with shelving above.

Rosendale is situated within the highly desirable Thorn district of Bearsden approximately quarter of a mile to the west of Bearsden Cross and therefore extremely handy for the excellent services and amenities to be found there. Nearby is Thorn Tennis Club, Thorn Park and Bearsden Golf Course. School catchment is for Bearsden Primary (at The Cross) and for Bearsden Academy at Courthill (recently ranked No. 2 State Secondary in Scotland). Within Bearsden is The High School of Glasgow Junior School on Ledcameroch Road (its Senior School just south of Bearsden at Anniesland). Also within Bearsden is St Nicholas’s Primary on Duntocher Road and in neighbouring Milngavie is the Preparatory School for The Glasgow Academy. Just south of Bearsden Cross is Bearsden Railway Station which provides regular links into Glasgow’s West End and City Centre – four trains per hour at peak times and two trains per hour at off peak times, including a service to Edinburgh Waverley.
Sat nav ref: G61 4BW

Property descriptions and related information displayed on this page, with the exclusion of Running Costs data, are marketing materials provided by Rettie & Co - Bearsden, and do not constitute property particulars. Please contact Rettie & Co - Bearsden for full details and further information. The Running Costs data displayed on this page are provided by PrimeLocation to give an indication of potential running costs based on various data sources. PrimeLocation does not warrant or accept any responsibility for the accuracy or completeness of the property descriptions, related information or Running Costs data provided here.

See all recent sales in G61