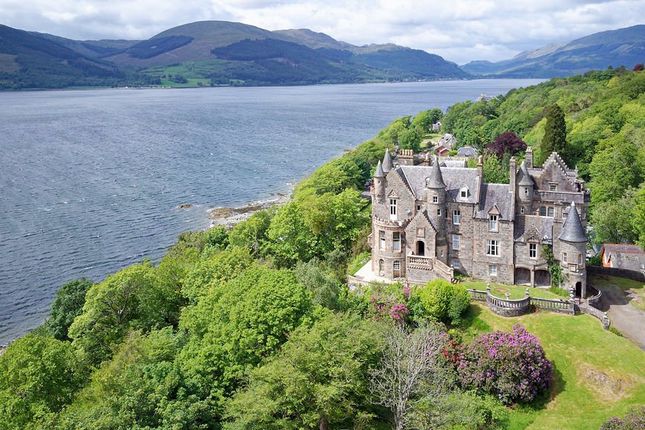 The property
The property is an A Listed Baronial Castle built-in the mid-19th century for James Templeton, a textile manufacturer and designed by the renowned architect, Alexander “Greek” Thomson, with later alterations and additions by John Honeyman and William Leiper.

Thomson was a prolific architect and created designs for a wide range of buildings including Churches. Houses, tenements and commercial buildings. His buildings were unusual and eclectic, decorative but powerful and rooted in the Greek Revival. His most famous buildings are probably the Caledonian Road Church and the St Vincent Street Free Church both in Glasgow. William Leiper, who was responsible for the Baronial additions to the property in the 1890s, was another renowned architect who worked mainly around Helensburgh.

Knockderry Castle is Category A Listed largely on account of the exceptional Leiperian interior which is considered one of the finest domestic interiors of its style in Scotland. Principally, the architectural importance of the building lies in the 1896 additions by William Leiper for John Templeton, the carpet manufacturer from Glasgow who was by then the owner. Leiper had also designed Templeton’s Carpet Factory in Glasgow Green.

The property benefits from a wealth of original features including crow step gables, turrets, stone balustrades and an extraordinary wood panelled drawing room which includes a minstrel gallery and other features including period fireplaces, panelling and stained glass windows.

The property does, however, require extensive upgrading and refurbishment.

The property, as noted, also includes a separate residential cottage which provides three bedrooms, along with other public and ancillary accommodation. The cottage also requires to be upgraded and refurbished.

Outside
The castle and cottage are set within attractive gardens with mature trees, a terraced area immediately adjacent to the castle and provides stunning views over Loch Long and the surrounding area.

Location
Knockderry Castle occupies an elevated position being accessed from Shore Road within the village of Cove. It provides excellent views overlooking Loch Long, a stunning sea loch situated on the west coast near Loch Lomond and Helensburgh. It is perfectly positioned for access to the Loch Lomond and the Trossachs National Park and the Highlands and Islands further to the north and west.

Cove is situated on the south-west coast of the Rosneath Peninsula within the Argyll & Bute region.

In common with other villages in the area, Cove provided summer lodgings for the families of wealthy Glasgow merchants, ship owners and businessmen in the 19th and early 20th centuries.

Property descriptions and related information displayed on this page, with the exclusion of Running Costs data, are marketing materials provided by Strutt & Parker - Perth, and do not constitute property particulars. Please contact Strutt & Parker - Perth for full details and further information. The Running Costs data displayed on this page are provided by PrimeLocation to give an indication of potential running costs based on various data sources. PrimeLocation does not warrant or accept any responsibility for the accuracy or completeness of the property descriptions, related information or Running Costs data provided here.

See all recent sales in G84