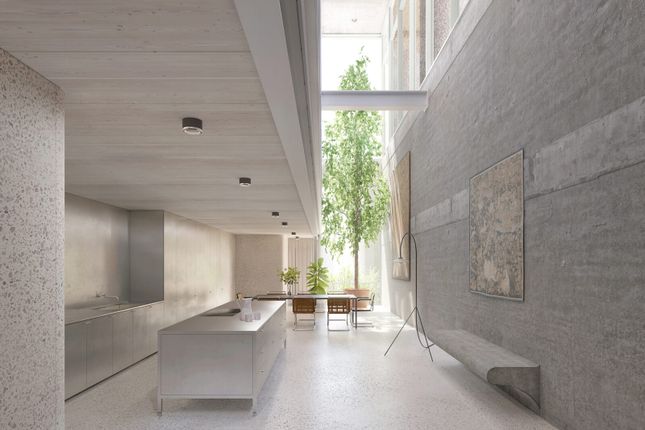 The incredible volume of a disused space at the foot of Barbican’s Cromwell Tower offers the rarest of opportunities to create one of London’s finest architectural homes. The Void Space is a single four-storey unit of over 30 ft in height and 65 ft in length, with a wonderful structural composition of varying exposed concrete finishes. A superb design developed by renowned architectural practices, 6a Architects and Sanchez Benton Architects, has achieved planning permission for a home approaching 3,100 sq ft, arranged along one side of a dramatic quadruple height space in a series of refined steel and glass-framed galleries.

Cromwell is one of three towers within the Barbican estate, along with Shakespeare and Lauderdale. Built in 1973 as part of Phase III of the City’s bold and ambitious building programme for the site, it is the eastern-most of the original towers, resting at the junction of Beech Street and Silk Street, near the Arts Centre, the Conservatory (at Podium level) and is the closest of the three to Moorgate.

The site itself occupies four levels at the base of Cromwell Tower, bounded to the south by Silk Street and, to the west, by the Barbican Upper Podium level, with a four-storey frontage to the south and two-storey frontage to the west. The latter façade, looking out onto the Podium at the upper level, is fully glazed and enjoys views over Nigel Dunnett’s award-winning planting scheme for the Barbican High Walk.

In 1951 the City of London ran a competition for architects to submit plans for a scheme to replace buildings destroyed by a night of bombing in December 1940. The proposal was to be called the Golden Lane Estate. Peter Chamberlin, Geoffrey Powell and Christoph Bon all submitted plans and agreed that if one of their practices won, they would form a partnership and work together on the project. Powell won the competition, and thus Chamberlin, Powell & Bon was formed in 1952. After their success with the Golden Lane Estate, the firm was asked to design the Barbican Estate, now arguably London’s most iconic brutalist complex. For more information about The Barbican, please see the History section.

The design for The Void Space at Cromwell Tower has been developed by 6a architects who have a deserved reputation for creating award-winning architecture within existing buildings of significant heritage value and for running what has become an increasingly international practice. Architects Carlos Sanchez and Tom Benton met while working at 6a architects from 2010 to 2017 and established Sanchez Benton Architects in 2017. Sanchez And Benton continue to have a close working relationship with 6a Architects and were selected by their client to act as collaborators on envisioning occupation of The Void Space design as presented in the renders appearing here.

Currently, access to the site is via the Silk Street frontage, a few steps above the surrounding street level. The design proposes to reimagine the Silk Street entrance through the introduction of an elegantly planted entry platform. Additionally, the design accommodates the opportunity to create access via the main foyer entrance of Cromwell Tower, which provides the amenity of 24-hour porterage.

The primary structural and material expression of The Void Space is exposed concrete, punctuated by expansive areas of robustly detailed steel-framed glazing. On the longer, lower levels, the concrete has a moderately fair-faced finish; on the Podium level and above, the concrete has a finely honed bush-hammered surface. The rich texture of the concrete and rhythmic sequence of the glazing set a dramatic and monumental backdrop against which the refined and elegant delicacy of the residential occupation will play out.

The proposed design takes the form of three ‘shelves’ stacked vertically along the length of the void to create long, elegant living spaces. Rising in the void, these spaces are connected by a steel stair, simple in concept and form but spanning an extraordinary distance and scale, rare for a residential setting. Correspondingly, the design embodies a vertical hierarchy strongly akin to the formal arrangement of a London townhouse; the more public spaces of the home will be arranged on the lower levels, and the more intimate spaces will be set out across the upper floors.

The kitchen will be placed at ground level, where cooking, pantry and utility areas are to be set beneath the first-floor level, with dining and socialising spilling out into the volume of the void. A living room, library and guest WC will span the first-floor level, and this floor will provide the opportunity for access to the mezzanine lobby of Cromwell Tower.

Two rooms will occupy the second floor. These could be arranged as two bedrooms or as a bedroom and study, depending on needs. A bathroom will be positioned between them. The main bedroom suite is proposed for the third floor, spanning the entire length of the shell, allowing for an elegant sequence of reposing, sleeping, dressing and bathing spaces.

As the Barbican’s name indicates, one of the principal intents of the original master plan was to provide an enclosed sanctuary for the Estate’s residents. Within the Barbican, both public and private outdoor spaces are concentrated centrally, and residents have access to a number of both private and public gardens within the enclosure of The Estate.

The principal private gardens extend to approximately two and a half acres and are sited at the Eastern and Western ends of the Barbican lake, which itself extends to over one and a half acres. These gardens are laid out in a naturalistic manner with expansive lawns, punctuated by the cover of foliage from various species of mature trees and surrounded by rich and textural borders planted with both native and exotic species. This whole ensemble makes for a tranquil and secluded retreat within the heart of the city, and this resource is often seen as one of the most unexpected but cherished aspects of life in the Barbican.

There are dedicated areas for children’s play along with a variety of architectural follies, including a brutalist waterfall and a sunken garden and seating area, which is set within the lake.

The Barbican has a wealth of public facilities available to residents within the Arts Centre, with its theatre, art gallery, concert venue, cinemas, and several bars and cafes. The City of London has recently appointed Allies and Morrison. Architects and Asif Khan Studio to deliver a multi-million-pound renewal of the Barbican Centre. The Centre forms is a key part of ‘Culture Mile’, the City of London’s cultural district, which stretches from Farringdon to Moorgate. The ‘Cultural Mile’ includes the Guildhall School of Music & Drama, the London Symphony Orchestra and the Museum of London. It provides a vibrant and creative area with a diverse and international cultural program of concerts, events, and performances.

The apartment is near an excellent selection of pubs and restaurants, including the nearby Smithfield Market, St. John, Luca, The Quality Chop House, and the Exmouth Market. Whitecross Street also has a food market every weekday. St Paul’s, the River Thames, the South Bank and Tate Modern are all close by. 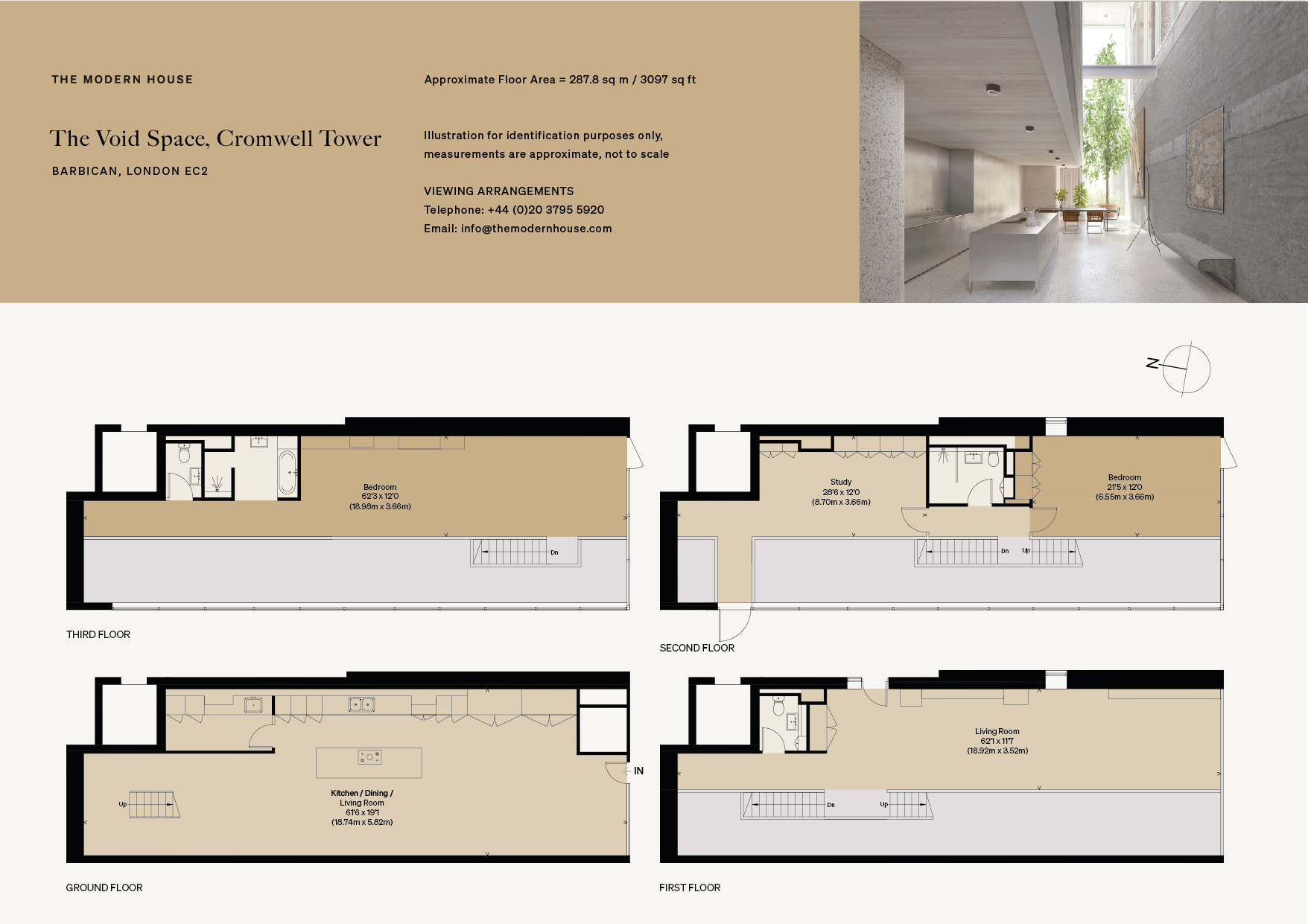 View all EC2Y properties for sale

View all EC2Y properties for sale

See all recent sales in EC2Y