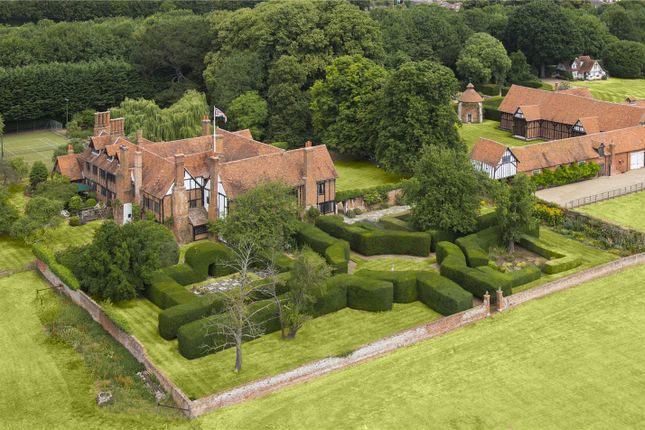 An historic 15th Century manor house in spectacular gardens and grounds. Described by Sir Nikolas Pevsner as "the most refined and most sophisticated timber framed mansion in England."

Description
Ockwells Manor is laid out principally over two floors and with the exception of a small cellar all above ground level. The house is faithful to its period and boasts spectacular panelling, stained glass windows and herringbone pattern brickwork.
The Jacobean staircase, 17th Century panelling and 15th Century stone fireplace are particularly striking features of the house. Aside from its architectural and historical pedigree, the house functions as a beautiful family home ideal for entertaining or family living in equal measure. The main entrance is dominated by a fabulous oak door which enters into a cloister leading to a small internal courtyard. Around this are a number of exceptionally fine rooms but the Great Hall, living room and dining room are particularly impressive.

On the first floor, the main bedroom has an en suite bathroom and dressing room with a minstrel’s gallery overlooking the Great Hall. There are seven further bedrooms, four of which are effectively en suite, and one of which would make an equally impressive main bedroom.

<Gardens and Grounds>
Immediately to the south of the manor, is a beautiful topiaried garden enclosed within a listed brick wall. This garden operates as a series of enclosures, one of which is laid out as a chess garden. The eastern elevation overlooks a neat lawned courtyard where a secondary entrance gives separate access onto the lane. Further to the north is a swimming pool with a neat terrace surround and an ornamental pond and tennis court.

<Barns and Outbuildings>
To the east of the house is a listed barn and the original medieval gate house with one bedroom Bailiff’s room above, also listed Grade I. These date from the 15th Century and comprise five stables, a tack room, hay barn and Polo practice pen (Stable Block 1). Forming the eastern side is an impressive 111 ft long Grade I listed threshing barn also dating from the late 15th Century with two gabled entrances and very fine timber framed interiors (Threshing Barn). Adjacent, is the beautiful Grade I listed Dovecote from the same period.

Location
Ockwells Manor is an historic and highly impressive Grade I listed timber framed manor house in an accessible location. J8/9 of the M4 motorway lies within a mile providing access to Central London and Heathrow Airport.

<B>Mainline Rail Service</b>
Maidenhead Station (1 mile) offers a direct service to
London Paddington with journey times from 20 minutes.
A direct service to London Waterloo is available from
Windsor & Eton Riverside Station (6.5 miles). The new high
speed Crossrail service is due to begin running in 2019/20
and will link Maidenhead directly with Heathrow Airport and
the City.

<B>Schools</b>
There are many popular schools in the area including
Wellington College, Eton College, Wycombe Abbey, The
Abbey School and The American Community School
together with St Piran’s and Claire’s Court in Maidenhead.
Burnham Grammar and Ludgrove are also nearby.

<B>Fine Dining</b>
The area is spoilt for choice in terms of fine dining with
an impressive selection of restaurants and public houses
including two with three Michelin stars – the renowned
Roux brother’s Waterside Inn and Heston Blumenthal’s
The Fat Duck both in nearby Bray, The Hind’s Head (one
Michelin Star) and The Crown. The Hand and Flowers at
Marlow and l’Ortolan at Shinfield are also nearby.

Racing: There is racing at Ascot, Windsor Park, Sandown
Park, Epsom and Newbury.
Polo: There is polo at Guard’s Polo Club and The Royal
County of Berkshire Polo Club.

Watersports: There are a variety of watersports at Bray
Lake and rowing at Maidenhead, Windsor and Dorney
Lake. Henley-on-Thames, home to the renowned Henley
Regatta, is within 10 miles.

Additional Info
Ockwells Manor was described by Sir Nikolas Pevsner as “the most refined and most sophisticated timber framed mansion in England” and with good reason.

The house was built for Sir John Norreys between 1446– 1456 and his first two marriages are commemorated in the stained glass window in the Great Hall. Sir John was keeper of King Henry vi’s wardrobe in 1444 and two years later assumed the office of Treasurer of the Chamber and Master of the Jewels for Henry vi’s formidable Queen, Margaret of Anjou. He was a regular in Parliament and Court and served as Sheriff in several counties and it is an indication of his growing wealth and influence that Norreys began to build. His most ambitious project at the time was the reconstruction of his first wife’s home at Yattenden near Reading, but before this project began it is likely that he had already commenced work at Ockwells which was conveniently close to the Royal Court at Windsor.

Ockwells has been greatly extended and restored since the first brick was laid, particularly since 1889, when substantial
work was carried out, and yet the building reveals itself to the modern visitor in a way that Norreys would undoubtedly recognise. As originally conceived, a narrow gate house opens into a large medieval courtyard now largely covered by lawn overlooked by a fine circular Dovecote. The courtyard is enclosed by a beautiful stable range and a magnificent threshing barn, both also built of timber frame and brick as well as the ruins of two other buildings, one of which is believed to have been a chapel. The architects at Ockwells benefitted from the introduction of mass produced high quality brick. From 1440 King Henry VI was heavily involved with the creation of a new college in the shadow of Windsor Castle at Eton and similarly the Duke of Suffolk at his seat in Ewelme in Oxfordshire, so the attractive mellow red brick was fashionable and available. It is no surprise therefore that the tradition of high quality timber framed residential architecture turns up at Ockwells. It also offers an insight into the specifics of the period, particularly the strikingly high ratio of glass to wall, and the 15th Century glass which survives at Ockwells is of exceptionally high quality. The glass at Ockwells is attributed to Henry vi’s architect Norreys Prudde.

Sir John Norreys did not live long enough to enjoy the fruits of his labour and he died in 1466. It underwent some internal adaptation during the 16th Century when it passed by marriage first to the Fettitlace family and then by purchase to the Days. In about 1600 a new staircase was added, the hall furnished with wainscoting and some new chimney pieces added. The fabric of the building then fell into decline until the late 19th Century when Charles Grenfell moved some of the glass to his home at Taplow Court for safe keeping. In 1885, his son William offered to return the glass if a new owner would grant him a 99 year lease of the manor in return. By this time, Sir Stephen Leach came to the rescue and he stripped the whole frame back and repaired it. It was then purchased by Sir Edward Barry, another enthusiastic antiquarian, who recast the building in its present form in stages, enlarging the dining room, inserting fire places and windows and moving the Jacobean staircase to its present position.

The present owners have owned Ockwells Manor since 1986 and with the help of Mansfield Thomas and Partners of Hertfordshire, returned it to its present order. 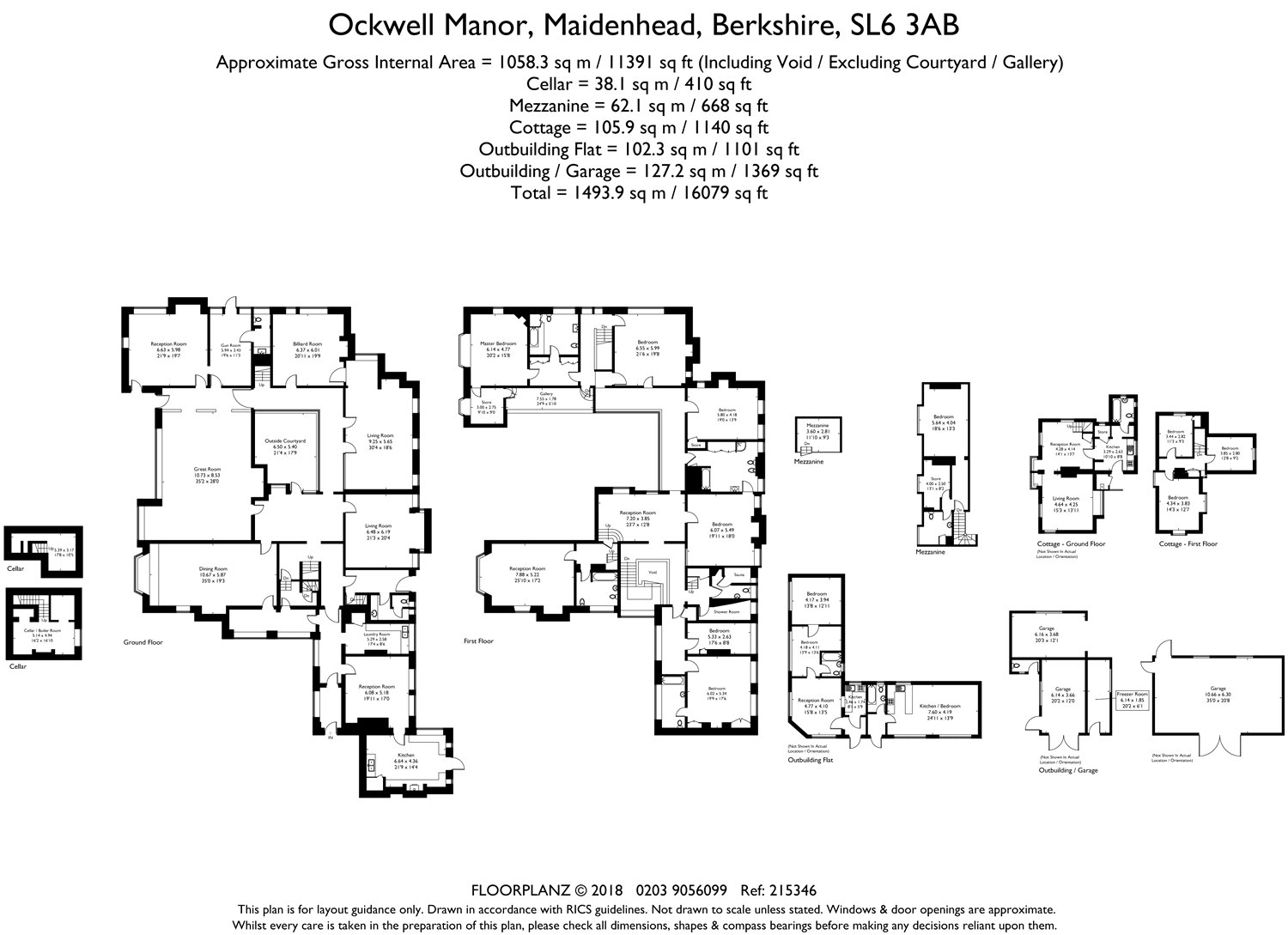 Property descriptions and related information displayed on this page, with the exclusion of Running Costs data, are marketing materials provided by Savills - Country Department, and do not constitute property particulars. Please contact Savills - Country Department for full details and further information. The Running Costs data displayed on this page are provided by PrimeLocation to give an indication of potential running costs based on various data sources. PrimeLocation does not warrant or accept any responsibility for the accuracy or completeness of the property descriptions, related information or Running Costs data provided here.

See all recent sales in SL6