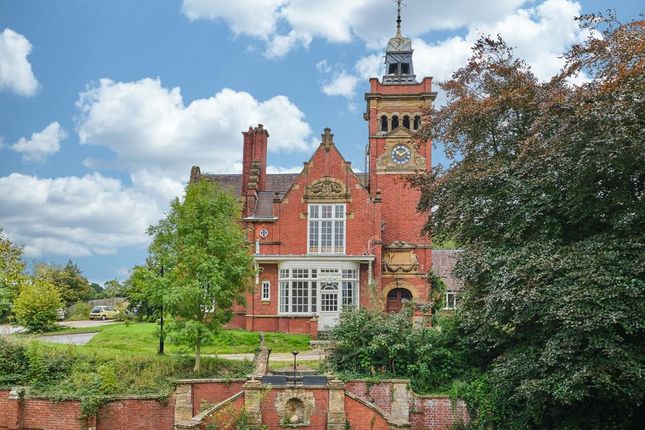 Tower House was built in 1890 as an adult learning centre by Sholto Vere Hare, Mayor of Bristol, in memory of his late wife. It is constructed with Cattybrook bricks with stone dressings and had illuminated clock faces in the tower. It was later converted to 'Almondsbury Hospital' and continued as such until 1996 when it became a private house. It has since been in the same ownership.

It is Grade II listed and it retains many exceptional features appropriate to the period. The principal rooms are striking with high ceilings. There are substantial roof trusses, moulded ceiling cornices, dado and panelled walls, parquet solid wood floors, an original range in the dining room, carved and stone fireplaces, a magnificent staircase in the reception hall and a mosaic floor and stain glass window in the entrance vestibule. There are domestic offices located off a rear hallway and a wing was added to the south west in the 1930's. The majority of the accommodation is arranged over two floors. A secondary staircase leads to a third floor with two bedrooms. A ladder staircase from the second floor landing leads to the clock tower. There are views from the front of the house from many rooms across the Bristol Channel and beyond to the Brecon Hills.

Although Tower House requires updating, it could easily continue as a superb and remarkable family house, with an interesting history. It has the potential for sub-division, or building in its grounds, all of which would be subject to the necessary planning and listed consents.

Tower House is approached through impressive gate piers giving access to two drives, once a turning circle, which could easily be reinstated. This area provides parking for a large number of cars. A large area of garden rises slightly behind the house to the south, with pond and summer house, and although once cultivated, is mainly overgrown. There are extensive views across the Channel to the Welsh Coast, to the north east.

Rights of Way
A right of way exists, initially for a few feet, over the entrance drive and branches off to the left, in favour of the neighbouring 'Scouts Hut'.

Owing to our commitment to keep both our colleagues and clients safe, we have many guided virtual viewing options available to you. These include video walkthroughs, 360 virtual reality tours and enhanced comprehensive photography, our teams will be happy to walk you through.

Property descriptions and related information displayed on this page, with the exclusion of Running Costs data, are marketing materials provided by Knight Frank - Bristol Sales, and do not constitute property particulars. Please contact Knight Frank - Bristol Sales for full details and further information. The Running Costs data displayed on this page are provided by PrimeLocation to give an indication of potential running costs based on various data sources. PrimeLocation does not warrant or accept any responsibility for the accuracy or completeness of the property descriptions, related information or Running Costs data provided here.

See all recent sales in BS32