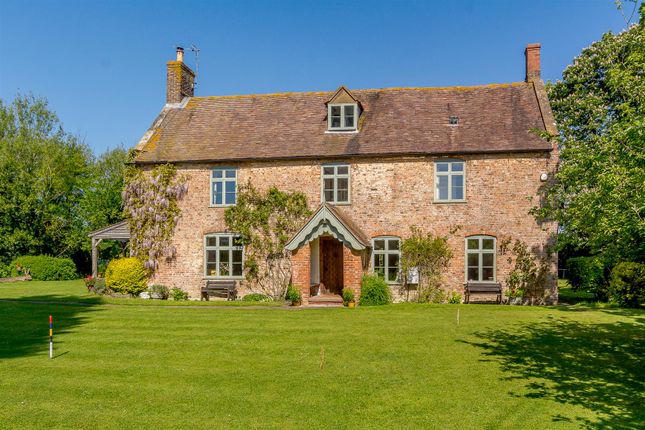 A most attractive old farmhouse with many traditional period features and A spectacular vaulted kitchen/breakfast room opening onto its pretty garden.

In its 200 year existence, Grade II Listed Grove Farm House has seen many changes but arguably none so spectacular as the magnificent kitchen/breakfast room the vendors have sympathetically crafted onto the original farmhouse. The owners love and knowledge of old buildings is readily apparent from the manner in which Grove Farm House is presented throughout, including new hardwood casements for the double glazed windows, future proofing the building. Behind the attractive mellow brick facade is a spacious interior with three good sized reception rooms each with their own character but the real surprise awaits at the rear; the new kitchen/breakfast room is a 'showstopper'. Part vaulted and spacious it has under floor heating and three separate sets of french windows allow the light to flood in, making a perfect family space. The first floor comprises three double bedrooms and a bathroom, with a fourth single bedroom (planning consent to convert to another bathroom), with a further three bedrooms and a further bathroom on the second floor. The property has a private driveway with ample parking, a level garden with a pond, an outbuilding and a greenhouse.

Westend is a small hamlet close to junction13 (Stroud) of the M5, so the perfect place to live if good access to the national motorway network is a prerequisite. A traditional farming area, typified by a patchwork of small fields and ancient hedgrows, it is on the edge of the Severn Vale immediately west of Stonehouse, from whose main line station, trains into London Paddington are scheduled from circa 90 minutes. Convenience is very much a hallmark of this location which also has the advantage of a choice of excellent schools, both state and private, including two grammar schools (Marling and Stroud High), Wycliffe College at Stonehouse and Beaudesert Park at Minchinhampton. Stonehouse has a good range of independent retailers and nearby Stroud four major supermarkets, including a large Waitrose, as well as an award winning Saturday Farmers' market. The administrative centre for the district, Stroud also has a leisure centre, multi-plex cinema and an active provincial theatre. There are good walks in the vicinity and the level topography on the Vale make this area very popular with cyclists.

Grove Farm House is Grade II listed. The driveway from the public road is shared.

The property is easily found by leaving Stroud in the direction of the M5 Motorway. Continue past Stonehouse towards the motorway and after approximately two miles at the roundabout by the Shell Service Station take the third exit and then almost immediately left again to Westend. After approximately 1/3 of a mile, you will find Grove Farm on the left. The turning is almost immediately opposite a set of former farm buildings (now office units); keep left and follow the drive round to the property.

Property descriptions and related information displayed on this page, with the exclusion of Running Costs data, are marketing materials provided by Murrays, and do not constitute property particulars. Please contact Murrays for full details and further information. The Running Costs data displayed on this page are provided by PrimeLocation to give an indication of potential running costs based on various data sources. PrimeLocation does not warrant or accept any responsibility for the accuracy or completeness of the property descriptions, related information or Running Costs data provided here.

View all Westend properties for sale

View all Westend properties for sale

See all recent sales in GL10