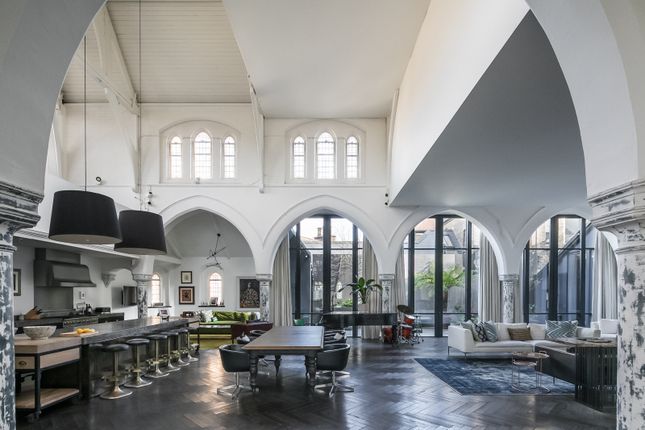 The spectacular frame of a converted Gothic church in Kensal Green has been redesigned internally to provide a four-bedroom home of stunning proportions and volume. It spans over 6,000 sq ft, with much of the living space contained within a breathtaking central hall that opens onto an enclosed courtyard garden. Throughout, the grandeur and elegance of its ecclesiastic past is celebrated in the retention of wonderful internal arches and the ethereality of filtered light through soaring stained-glass windows.

The house is approached at the quiet juncture of two no-through roads. At the northern end of the building, a conical-roofed turret serves as the entrance hall, and within it, a bespoke bronze staircase spirals up to a galleried study space overlooking the living expanse below.

From the hall, an elegant Italian-tiled floor leads left to a pantry and guest WC, and right into the arresting reception space, comprising kitchen, dining, and formal and informal living areas. With the exception of the hall and pantry, blackened oak-parquet flooring extends across the ground level with underfloor heating throughout. The kitchen is custom-made by Rupert Bevan, with polished-concrete worktops and cabinets clad in copper-coloured zinc.

A series of equilateral arches frame the glazed walls of the bright courtyard garden, for which there are five points of access through towering double doors.

Positioned centrally at the southern end of the reception space, is a fireplace with a beautiful herringbone-brick back and honed-marble surround. Behind it are doors to two rooms, both set within the last of the parallel archways; to the left is a wonderful guest bedroom, with built-in wardrobes, an en-suite shower room and access to the garden. To the right is a versatile room, currently a gym with concealed utilities.

Steps ascend to a raised platform between the rooms, where a stunning bronze staircase rises beneath stained-glass windows, leading to the first-floor bedrooms. The two are equal in size, with integrated storage, and en-suite bathrooms, both with free-standing baths and separate showers.

The master bedroom is found on the second floor. It is entered through a dressing area and set beneath an incredible vaulted ceiling with several skylights that flood the space with natural light. Two further dressing rooms, one currently used as a nursery, flank the bedroom at the northern end, and there is a wonderful, spacious bathroom finished in tadelakt with a shower and free-standing bath.

Kenmont Gardens is brilliantly located close to the Grade i-listed, 72-acre open space of Kensal Green Cemetery, and a short walk from the northern end of Ladbroke Grove (and the Grand Union Canal towpath). Chamberlayne Road is within easy reach, with its fine selection of independent cafés, restaurants, delis, pubs and shops – including a butcher, greengrocer, specialist bakery and one of London’s finest florists. Local favourites include Sacre Cuore pizzeria, indie cinema ‘Lexi, ’ and Retrouvius antiques for design lovers.

To south is Wood Lane and the revitalised White City. The recently renovated Television Centre is at the centre of an exciting regeneration of the area, with independent restaurants such as the brilliant Endo at the Rotunda, Kricket, a cinema and the new Soho House members’ club, White City House. Also nearby is White City Place, a creative campus with restaurants, shops and museums, and the new home of rca’s Schools of Communication, Humanities, and Architecture.

The nearest underground station is Kensal Green (around seven minutes’ walk) which has access to both the Bakerloo Line and London Overground services. Further Overground services run from Willesden Junction and Kensal Rise station (10 and 15 minutes’ walk respectively), with connections to Richmond in one direction and Highbury & Islington in the other. The area is well served by a wide range of bus services into central London and elsewhere. 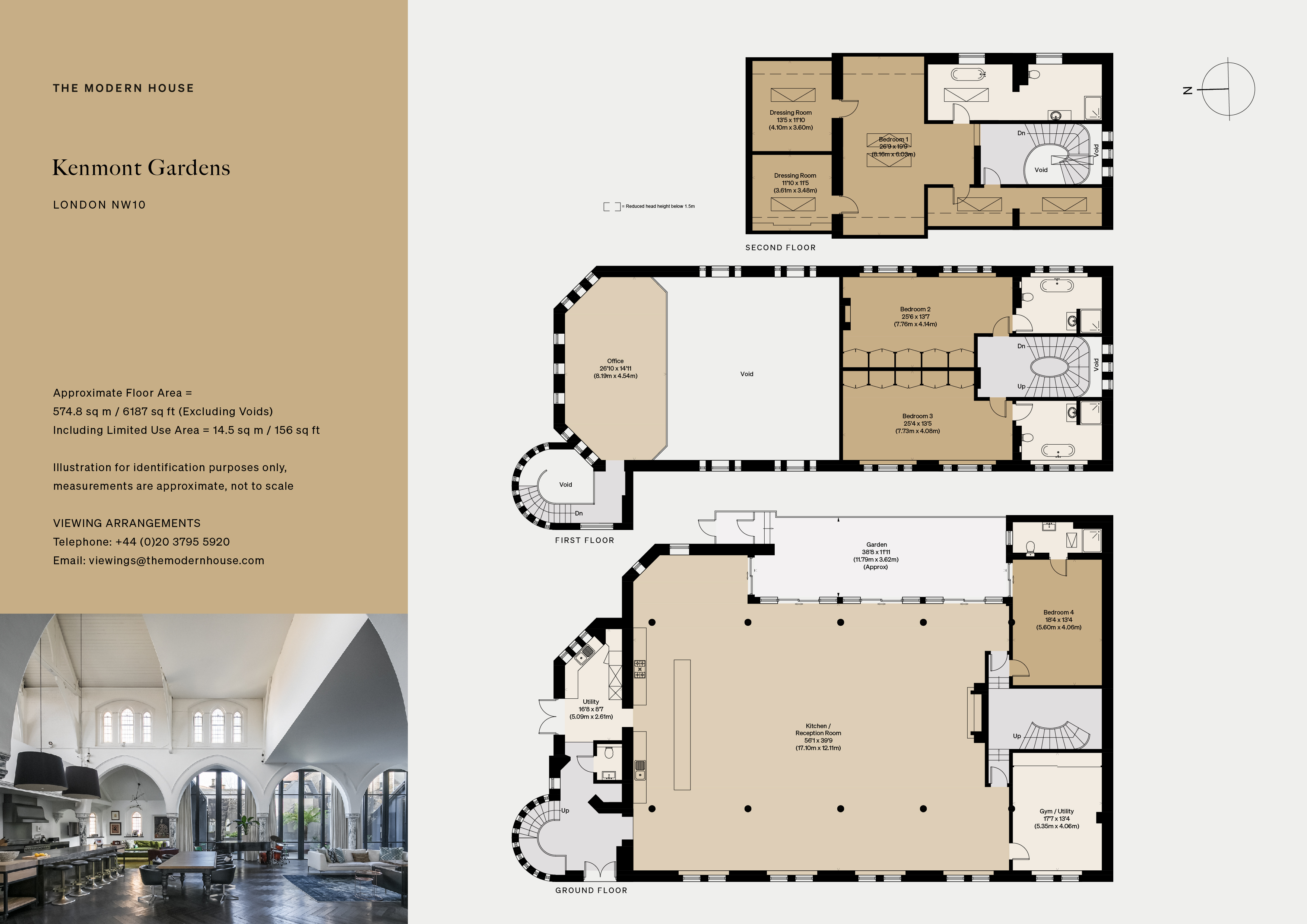 View all NW10 properties for sale

View all NW10 properties for sale

See all recent sales in NW10