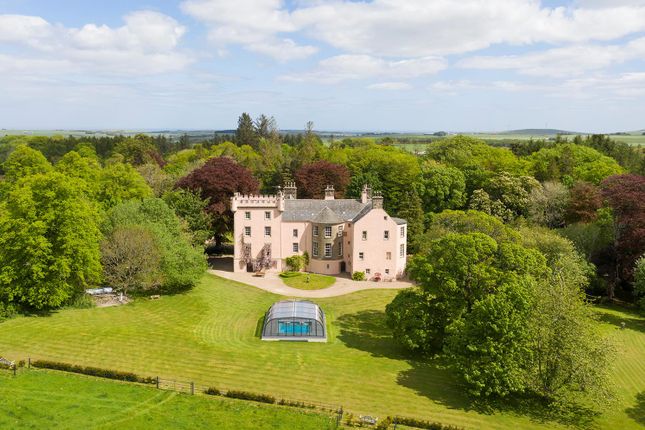 Castle of Park is a Grade A listed 16th century castle with late 18th and 19th century additions. With a Z plan layout, the accommodation is laid out over four floors and includes six principal reception rooms, 8 bedrooms, 9 bathrooms (4 ensuite). In addition, there is a 2-bedroom flat on the top floor. Within the grounds there is a pavilion building which is used for functions. The policies extend to about 36 acres in total and are a real feature of the estate. They comprise of sweeping lawns, ponds, woodland walks, a walled garden, orchard and croquet lawn. There are a number of outbuildings including a gp shed, potting shed and a triple garage. The gardens are surrounded by some mature woodland and also include a large paddock.

The Park Estate was originally part of the Royal Forest of Banff and was granted by King Alexander II to a Norman knight, Sir Walram de Normanville in 1242. The current Castle is a large rambling, harled mansion which may have foundations from the 13th Century, but was built or rebuilt into a Z plan tower house in 1536. In the 1700s, a number of extensions were added to Park changing it from a fortified house into a large Georgian country mansion and in 1829 a Gothic Tower was the final addition. The current owners purchased the castle in 2007 and over time they sympathetically refurbished the castle. The property has been used as a self catering holiday home and exclusive use venue over the last 4 years with visitors coming from America and Australia. The current owner resides in the top floor service flat. The current Laird is a keen open water swimmer and installed the dual propulsion endless pool in the garden in 2017. She runs her own year round open water swimming club on the nearby coast. Castle of Park offers a wonderful opportunity as a private home or an opportunity to continue to run as a guest house/ corporate venue.

Castle of Park is approached off the main road via a treelined driveway with a gravel sweep at the front. The a-listed castle originally dates back to 1242 and was later rebuilt in the early 1500s into a Z plan which remains the basis of the castle layout today. The castle is reputed to have provided accommodation for King Robert the Bruce, during his forays north in turbulent times. Castle of Park has been continuously occupied and has, therefore, evolved over the centuries to reflect a pleasing combination of ancient and, more latterly, 19th century architecture. The castle has many wonderful internal features including the billiard room with wood burning stove, the barrel vaulted dining room and the historic chapel. The Great Hall with open fireplace, panelling and medieval painted ceiling together with the three window seats overlooking the front lawns is also beautiful. In addition, the drawing room gets plenty of natural light through its large Georgian sash-and case windows.

Pavilion
Situated a short distance away from the castle, the pavilion building was constructed in 2018. Benefitting from a ground source heat pump, the building comprises of a large function room, kitchen and three W.Cs. The architect award winning building is used for various events including weddings, ceilidhs, conferences and meetings.

Gardens
The policies at Castle of Park extend to a total of 35.67 acres. The gardens are a wonderful feature and include sweeping lawns, a pond, a labyrinth, a rose garden, a croquet lawn and a large walled garden with orchard. A burn runs through the grounds, bordered by a Victorian rockery and ornamental walks through rhododendrons and azaleas. Within the garden there is dual propulsion Endless pool (5 m x 5 m) with a recently installed pool enclosure.

Woodland and Grazing
The grounds enjoy additional amenity and privacy with several blocks of mixed mature woodland including lime, oak, ash, house chestnut, beech, copper beech and sequoia. In addition, there are four fields of pasture which extend to 17 acres and are used to graze a small herd of Highland ca

Castle of Park sits amongst rolling farmland close to the Moray coastline and just south of the village of Cornhill. Cornhill provides local services including a pub, village hall, garage and church. The attractive coastal village of Portsoy (6 miles) has further services including hotels, cafes, a harbour, small supermarket, nursery and a primary school. There is also a primary school at Ordiquhill (3 miles). Further services are found in the county town of Banff including secondary schooling. The private school of Gordonstoun is 37 miles to the west, near Elgin.

The A96 provides swift access between the cities of Aberdeen (51 miles) and Inverness (68 miles). The nearest train station is at Keith (13 miles) which is on the Aberdeen to Inverness line.

Aberdeen airport (41 miles) provides flights to a variety of domestic and international destinations.

The Moray Coast is only 6 miles away and is renowned for its relatively mild climate as well as some of the highest levels of sunshine in the UK. The surrounding coastline has a string of attractive fishing villages including Portsoy, Cullen and Sandend as well as many sandy beaches including Banff links, Cullen and Sandend. The Moray Firth offers sailing, windsurfing, kitesurfing, sea angling and dolphin watching. For boating enthusiasts, there are marinas at Banff and Whitehills, whilst Portsoy hosts an annual Traditional Small Boats Festival in the summer attracting over 15,000 visitors. Nearby Duff House at Banff, is part of the National Galleries of Scotland and houses a range of art treasures. The surrounding area has plenty of sporting opportunities with salmon and sea trout fishing on the Rivers Deveron and Spey within easy reach. Driven grouse and pheasant shooting are available to rent on surrounding estates. The beautiful Spey valley with its whisky trail and skiing at the Lecht in the Eastern Cairngorms is 49 miles away. For the golfer, there are courses nearby including the famous Duff House Royal and Royal Tarlair.

Property descriptions and related information displayed on this page, with the exclusion of Running Costs data, are marketing materials provided by Knight Frank - Edinburgh Sales, and do not constitute property particulars. Please contact Knight Frank - Edinburgh Sales for full details and further information. The Running Costs data displayed on this page are provided by PrimeLocation to give an indication of potential running costs based on various data sources. PrimeLocation does not warrant or accept any responsibility for the accuracy or completeness of the property descriptions, related information or Running Costs data provided here.

View all Cornhill properties for sale

View all Cornhill properties for sale

See all recent sales in AB45