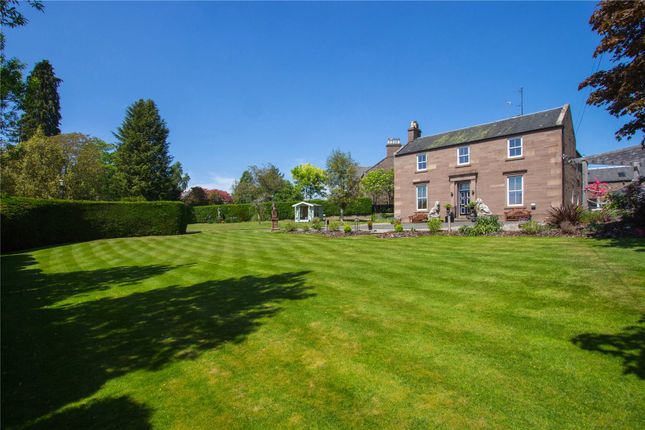 Airlie House is situated in Airlie Street which is a well known and prestigious residential area of Brechin, within easy walking distance of Maisondieu Primary School, the High School and the town centre. Brechin is well served with local shops, business and leisure facilities together with nursery schools. There is a swimming pool at the new community campus. Private schooling is available at Lathallan (Johnshaven) and the High School of Dundee, both with dedicated bus services from the town.
Brechin is situated close to the A90 dual carriageway allowing easy access to both Dundee and Aberdeen, which offer all the facilities expected of major cities. Dundee is known as the City of Discovery, and is renowned for its cultural facilities, including the new V&A museum. There is an airport at Aberdeen which offers a wide range of domestic and European flights. Journey times to Aberdeen and Aberdeen Airport have been much reduced with the opening of the Western Peripheral Route. There are also flights from Dundee to London. Montrose and Laurencekirk are on the main east coast railway line, including a sleeper service to the south. Brechin is well placed to take advantage of the many sporting pursuits the county of Angus has to offer. There are fine golf courses at Brechin, Edzell and Montrose and the championship course at Carnoustie. Fishing is available on the nearby South and North Esks. Just inland are the beautiful Angus Glens which offer some of the best hill walking in eastern Scotland, together with skiing at Glenshee. Brechin Equestrian Centre is located close by and there are renowned sandy beaches at Lunan Bay and at St Cyrus, which is a nature reserve, as is Montrose Basin.

Electric gates open onto a tarred drive which leads up to gravelled parking and turning at the front of the house. Steps with wrought iron rails lead to a wooden front door with two carriage lights and a glazed overlight. The entrance vestibule with an inner glazed door with side and overlights leads to the impressive hall which has high level skirting and an arch which leads through to the inner hallway. To one side are the dining room and study, both with high level skirting. Opposite, the striking drawing room has a picture rail, wood burning stove, high level skirting and a wall mounted Panasonic TV. The inner hallway has the staircase to the first floor, three picture lights, an understair cupboard and a back door. The well proportioned sitting room, previously used as a dining room, has high level skirting and a wall mounted Sony Bravia TV, while the shower room has a corner shower cabinet with wet walling, pedestal washbasin, WC and window shutters. Adjacent is the fully fitted kitchen which has wooden wall and floor units with soft closing drawers, tiled splashbacks, three Lamona ovens, neff four ring gas hob with extractor, Bosch dishwasher, Whirlpool American style fridge freezer with water and ice dispenser, central island unit, further display and storage cupboards and a Samsung wall mounted TV. Beyond is the utility room which again has wooden wall and floor units with tiled splashbacks and a Beko washing machine, Indesit dryer, Montpelier under counter fridge, shelved storage cupboard, clothes pulley and a side entrance door.

The staircase with wooden handrails and wrought iron balustrades leads to the first floor. Part way up the stairs is bedroom one (Glen Moy) with a feature wood burning stove. The first floor landing has four picture lights and two wall lights, while the large and well fitted bathroom has a freestanding bath, ornamental vanity unit with marble top and two washbasins, pedestal washbasin, WC, large shower cubicle with wet walling and a waterfall shower and hand set. Bedroom two (Glen Esk) has a wall mounted Samsung TV, window shutters and an en suite shower room with a corner shower cubicle, pedestal washbasin and WC. Off the landing, and at the back of bedrooms three and five, are a large store room and linen cupboard, which have potential as further en suites. Bedroom three (Glen Prosen) has window shutters and a walk in wardrobe with hanging rails, while bedroom four (Glen Isla) also has window shutters and two bedside lights. Bedroom five (Glen Lethnot) has window shutters, a wall mounted Sony TV and a walk in wardrobe with hanging rails.

Outside are lovely and enclosed gardens which are enclosed by hedges, fences and a wall. Mainly comprising lawns there are also trees and shrubs. On one side is a wooden summer house (2.6 m x 2.4 m) while on the other is the octagonal log cabin style summer house (5.6 m (max) x 4.1 m (max)) with power and light and linking to decking creating a lovely outside entertaining area. Below is a paved pergola. To the side of the house is a dog kennel and run. Attached to the house is a stone built range of outbuildings with a store, further store with stairs to a loft, log store and an outside bin storage area. Behind is a further stone built store (1.43 m x 2.23 m) with a corrugated roof, and a former wooden garage (4.6 m x 2.75 m) with a felt roof, and now used as another garden store. At the back of the house is a boiler room housing a Worcester boiler, and at the front are uplighters to illuminate the house at night.

From the south head north on the A90 dual carriageway and take the turning into Brechin (A935) passing the Brechin Castle Centre. On entering Brechin turn left after passing the Mechanics Institute into Airlie Street. Airlie House will be found on the right hand side, just after the corner.

From the north head south on the A90 and take the turning into Brechin (B966) passing through Trinity. On entering Brechin turn right at the mini roundabout signposted to Little Brechin and Menmuir. Then take the second turning into Latch Road and then take the fourth turning on the left into Airlie Street and Airlie House is the 7th entrance on the left. 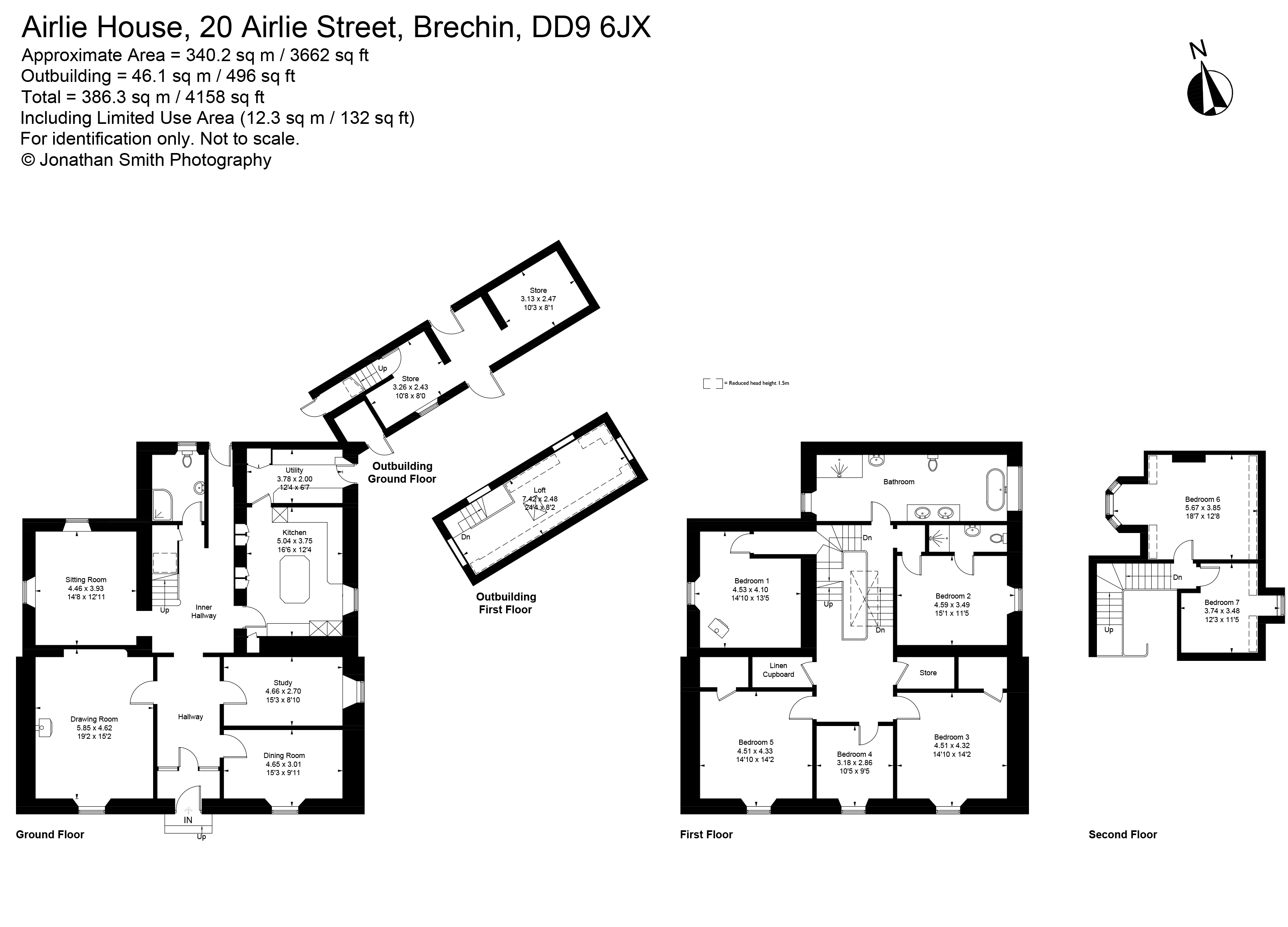 Property descriptions and related information displayed on this page, with the exclusion of Running Costs data, are marketing materials provided by Savills - Brechin, and do not constitute property particulars. Please contact Savills - Brechin for full details and further information. The Running Costs data displayed on this page are provided by PrimeLocation to give an indication of potential running costs based on various data sources. PrimeLocation does not warrant or accept any responsibility for the accuracy or completeness of the property descriptions, related information or Running Costs data provided here.

See all recent sales in DD9