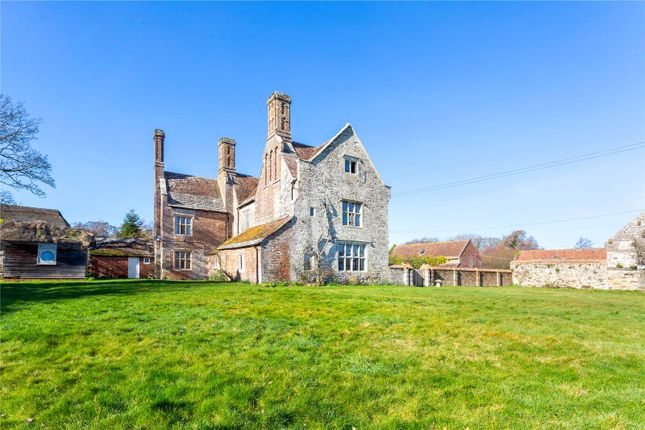 Woolbridge Manor is situated on the north side of the historic Elizabethan Wool bridge, which crosses the River Frome, and approximately 400m from the centre of the popular village of Wool, with amenities including a railway station, convenience store, several public houses and a village school.

The Saxon walled town of Wareham, also with a train station is approximately five miles away, and the larger towns of Dorchester and Poole are approximately 14 miles equidistant.

The renowned Jurassic Coast, a unesco World Heritage Site starts at the stunning Studland Beach, and Lulworth Cove beach is approximately six miles from the house.

Other local attractions include the Bovington Tank Museum and Monkey World.

The A31 which leads on to the M27 and M3 to London can be joined at Bere Regis approximately five miles away.

Woolbridge Manor is understood to date back to the early 17th Century, but could potentially have earlier origins. This unique and historic landmark property, was once the property of the Turberville family, and was the inspiration for Wellbridge House in Tess of the d’Urbervilles by Thomas Hardy. In Hardy’s novel, first published in 1891, Tess and Angel spend their ill-fated honeymoon at the house.

The handsome elevations are of red brick and stone, under a mostly tiled roof with stone slates to the lower courses, and feature beautiful stone mullioned windows with leaded lights. A projected entrance porch on the north front has a circular panel above with a date stone of 1635, and is flanked by twin circular windows. Other notable features of the exterior are the imposing tall gable ends and impressive brick chimney stacks.

Woolbridge Manor would now benefit from modernisation and refurbishment, yet offers huge potential for a purchaser to improve and personalise this magnificent home to their own specifications. The principal rooms of the house are well proportioned with excellent ceiling heights, and retain many period features. A brief summary of the accommodation is as follows;

An entrance porch with ornate brick piers, and a heavy oak front door, open into the reception hall, with flagstone and tiled floor, two deep walk in storage cupboards and additional store, and a guest cloakroom. The drawing room has double aspect windows, a recessed brick fireplace with stone surround, flagstone floor, display recess and cupboard. The adjoining sitting room/ study has a decorative plaster ceiling and a false wall that has been partially removed revealing a period fireplace. The dining room has double aspect windows, flagstone floor, period oak dresser and a wide fireplace with beam over, featuring ironwork from a cooking spit. The galley style kitchen has worktops with cupboards beneath, a four oven Aga which is not in working order and door to the utility/ boot room.

A staircase leads up to the first floor landing with linen cupboard, the master bedroom has views across fields towards the river, wood floor and fireplace, and a door to a dressing room/ nursery bedroom, the second principal bedroom has a fireplace and recessed cupboard, and there is a third bedroom and family bathroom.

On the second floor are two large attic bedrooms with sloping ceilings and exposed beams, plus a bathroom and separate wc.

Outside
The gardens of Woolbridge Manor lie on three sides of the house and extend to approximately 0.6 acres. The delightful walled front garden on the north side has a central path with lawns and shrub beds on both sides and a brick store built into one corner, possibly a dovecote. A gate opens into the large side garden, bounded by a high hedge, with twin gates onto the road. The gardens then extend around to the rear where there is a thatched shed and log store both in need of attention, plus two storage rooms adjoining the rear of the house. Adjacent to the road is the detached brick and flint building known as Chapel Barn, understood to have formerly been used as a chapel and currently used as a garage/ store. There is an area of grass to the front side and rear of the barn which could potentially be used for parking.

From Wareham, proceed west on the A352 for about 4.2 miles, turning right into Tout Hill, signposted to Bere Regis and Monkey World. After about 200m turn left into the lane doubling back and Woolbridge Manor is at the end of this lane just before the pedestrian only Wool bridge.

If coming from the A31 at Bere Regis, proceed south signposted to Wool for about 4.5 miles, turning right into lane just before the main road junction. Woolbridge Manor is at the end of this lane on the right, just before the pedestrian only Wool bridge.

Property descriptions and related information displayed on this page, with the exclusion of Running Costs data, are marketing materials provided by Savills - Wimborne, and do not constitute property particulars. Please contact Savills - Wimborne for full details and further information. The Running Costs data displayed on this page are provided by PrimeLocation to give an indication of potential running costs based on various data sources. PrimeLocation does not warrant or accept any responsibility for the accuracy or completeness of the property descriptions, related information or Running Costs data provided here.

View all Wool properties for sale

View all Wool properties for sale

See all recent sales in BH20