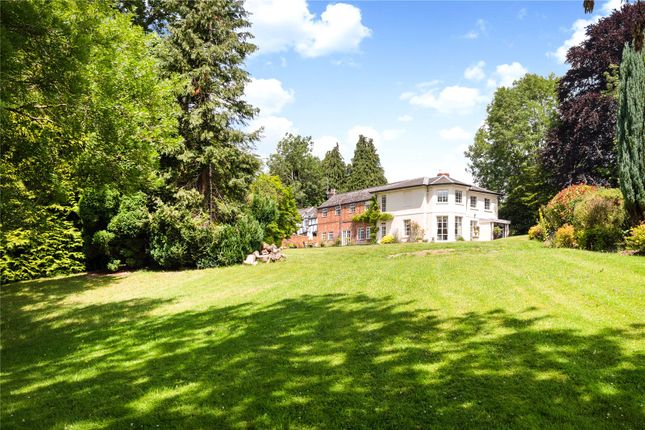 A magical detached house with extensive and versatile accommodation including a cottage, in an elevated position with fine views on the outskirts of Charlton Kings set in about 3.5 acres.

Detmore House is beautifully located on the very outskirts of Charlton Kings in an elevated position with fine views, accessed by a long private driveway from Detmore Close, just off the London Road. Charlton Kings is a very desirable district of Cheltenham due to a combination of excellent local facilities and the incredibly popular Balcarras School, which is located just a third of a mile from the house as the crow flies.

Cheltenham is famed as one of the most complete Regency towns in England and historically the original and most fashionable spa.

Less than a hundred miles from London it nestles beautifully between the Cotswold Hills and the Wye Valley, and is home to numerous prestigious schools including Cheltenham College, Cheltenham Ladies College, Dean Close and Pates Grammar which recently topped the national gcse schools league table.

Now a highly sought after place to live (voted the number 1 place in the United Kingdom to bring up a family by the Telegraph early in 2015), the town is well known for its grand houses set amongst formal avenues and beautiful garden squares.

For those with a taste for the finer things in life, there are Michelin starred restaurants, numerous bars, stylish shops and salons aplenty. For art and history lovers there is The Wilson, Cheltenham's newly refurbished museum and art gallery, whilst Cheltenham also has a thriving cultural scene that includes two concert halls and three theatres. There are the numerous festivals such as The Wychwood Festival, the festivals of literature, science, food and drink and, perhaps the pinnacle for some, the jazz festival, which has historically attracted such known performers as Van Morrison, Jamie Cullum and Jools Holland.

Undoubtedly for many more, the highlight of the year is the annual racing festival culminating with the Cheltenham Gold Cup, the blue riband event of the national hunt calendar, and an attraction that draws the public to the town year after year.

Detmore House is a wonderful detached period house, understood to date originally from the 16th Century, set in the Cotswolds aonb and located in an elevated position with fine views to the South East across magical rolling countryside.

The house itself offers extensive two storey accommodation which currently comprises six double bedrooms on the first floor, each with their own en suite bathroom or shower room, accessed by twin staircases.

On the ground floor, the main front door leads in to a wide reception hall with the impressive staircase ahead and a lovely fitted log burner with wonderful surround. Adjacent is the drawing room with a bay window to the front enjoying the fabulous view and double doors in to a secondary reception room currently used as an office.

Across the inner hall is the primary cloakroom and a door in to the intimate sitting room, used by the owners on a day to day basis as a cosy TV room. There is a front to back kitchen/dining room, with a wonderfully large central island unit and a sliding bay window to the rear. Beyond is a utility room, boot room, plant room and secondary cloakroom.

Attached to the house is a cottage, independently accessed from the outside and previously used as to provide rental income on an assured shorthold tenancy. The accommodation comprises kitchen on the ground floor, with a sitting room, bathroom and bedroom on the first floor.

Beyond the house is a range of single storey outbuildings comprising a combination of garages, stores and workshops, to the side of which is a very useful log cabin that has previously been used as an office. To the rear of the house are three stables.

A long driveway leads from Detmore Close with mature borders either side opening in to formal gardens around the house. The driveway splits about halfway, with the formal entrance to the right and the rear entrance to the left. Overall the grounds extend to about 3.5 acres including an area of amenity ground immediately to the rear, paddock to the front and formal gardens below the house.

From Cheltenham town centre head through Charlton Kings on the A40 London Road towards Oxford. At the conclusion of the built up area, immediately after the petrol station and East End Road on the right, turn left in to Detmore Close. Turn immediately right in to a private drive signposted Detmore House and as the drive splits keep right towards the front of the property.

Property descriptions and related information displayed on this page, with the exclusion of Running Costs data, are marketing materials provided by Savills - Cheltenham, and do not constitute property particulars. Please contact Savills - Cheltenham for full details and further information. The Running Costs data displayed on this page are provided by PrimeLocation to give an indication of potential running costs based on various data sources. PrimeLocation does not warrant or accept any responsibility for the accuracy or completeness of the property descriptions, related information or Running Costs data provided here.

View all The Orchard properties for sale

View all The Orchard properties for sale

See all recent sales in GL52