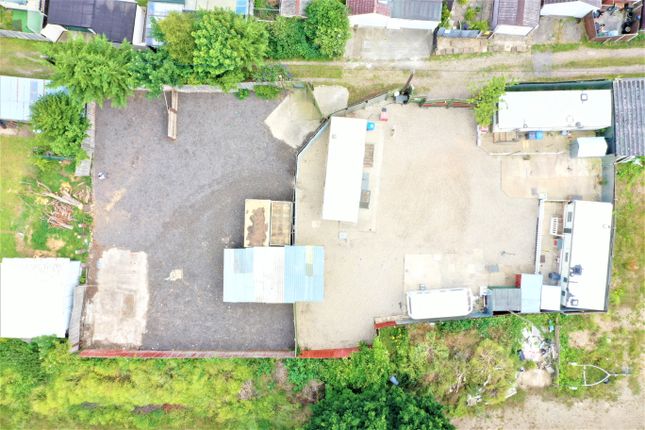 Location
These plots of land are located in an English coastal town that is situated on the edge of the Norfolk broads; it is the most easterly point of the British Isles. Home to Blue Flag award winning sandy beaches with stunning and historical Victorian seafront gardens, the Royal Plain Fountains, two piers and independent eateries. There are a number of fantastic schools in the area to suit all ages, a Bus Station and Train Station which both run regular services to Norwich and surrounding areas. Lowestoft is 110 miles north-east of London, 38 miles north-east of Ipswich and 22 miles south-east of Norwich.

Description
A unique and exciting opportunity has arisen to purchase two adjoining plots of land in the Pakefield area of Lowestoft, Suffolk.

The first plot is currently being used as a caravan park and has operated as such since 1969. The second plot was a successful family run scrap metal yard since the 1950s and is currently vacant, so there is potential to make use of the land as it was originally intended, or to change the use completely and start afresh.

There are currently three mobile homes/static caravans and one touring caravan, all of which are connected to a septic tank, mains water and electric. Electric is pre-paid, and there are also separate coin meters on each of the caravans. There is not currently a gas connection to the plot, however lpg gas bottles have been utilised previously on the site for all caravans.

The three mobile homes/static caravans have rented for up to £450 per month and the smaller, touring caravan has previously been rented out for £280 per month. This represents a monthly revenue of £1680 with its current set up.

There is a bike shed with another wooden unit for storage, and each caravan is mounted on it's own concrete area with plenty of space around each.

The site is fully licensed and exchangeable with all paperwork available upon request. There have been £0 business rates payable due to small business rates relief, however we would encourage any potential buyers to make enquiries as to whether this would also apply to them.

The second plot has functioned as a family-run scrap metal yard for over 60 years, up until 2016, however the license would now need to be renewed if the new owner intended to use it for it's original purpose.

Should someone be interested in doing something different with the land, the current planning permission allows for uses such as a clothing store with a portacabin, toilet and a separate workshop. Other potential uses include container storage, a builders yard, vehicle repair and storage, or they could look to extend the current caravan park to grow that side of the business.

Currently there is a large gravelled open plan area with wooden fencing around the plots perimeter. There is a large gate for vehicular access and a smaller doorway for access to the caravan park. There are a number of units on the land currently including one wooden storage unit and two smaller container units.

This plot is slightly larger at around 5,600sq ft.

There is access to both plots via a private road off Blackheath Road. The track is approximately 12ft wide and can accommodate larger vehicles as and when needed. The plots are also very close to Tom Crisp Way, so there is very easy access to the A12, A47 and A146.

All caravans, sheds and other equipment currently on the land are included in the sale price.

For any questions or to arrange a viewing, please contact Jack Taylor at Paul Hubbard Commercial.

Property descriptions and related information displayed on this page, with the exclusion of Running Costs data, are marketing materials provided by Paul Hubbard Commercial Ltd, and do not constitute property particulars. Please contact Paul Hubbard Commercial Ltd for full details and further information. The Running Costs data displayed on this page are provided by PrimeLocation to give an indication of potential running costs based on various data sources. PrimeLocation does not warrant or accept any responsibility for the accuracy or completeness of the property descriptions, related information or Running Costs data provided here.