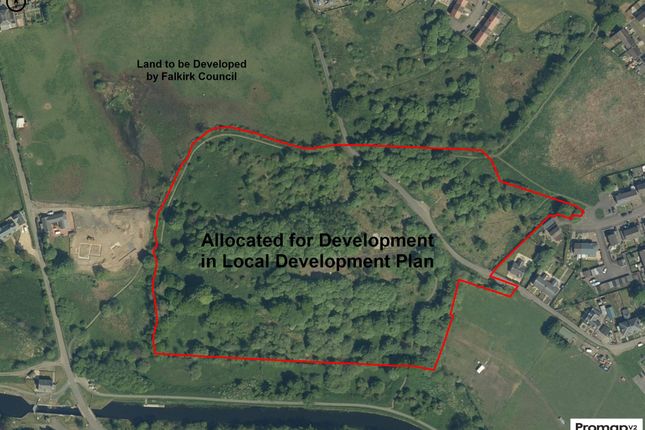 The site extends to approximately 4.9 hectares (12.1 acres) and an allocation of 110 units is a relatively low density of approximately 9 units per acre, reflecting
the fact that some civil engineering works may be required on the southern part of the site. This is a brownfield site, having been a former distillery which was
demolished in 1981. The area is now very much semi-rural in character, albeit lying on the very fringe of the town. The Forth and Clyde canal lies to the south.
Falkirk Council own the greenfield site immediately to the north.

The previously proposed development shows 110 units, with a mix of semi detached, detached and apartment styles and an indicative total development floor area of some 9,615 sq m which is a relatively low coverage. The layout and design are now dated and these can be updated to provide a suitable mix at an
appropriate density to suit current market requirements.

LocationBanknock is situated just off the M80 Glasgow to Stirling route, located approximately 17 miles north-east of Glasgow and 11 miles to the south of Stirling, with Falkirk lying approximately 8 miles to the north-east. This is a very accessible location within Central Scotland, the site also lying to the south of the A903 which connects Falkirk with Glasgow via Bonnybridge, Banknock, Kilsyth and Kirkintilloch. This is very much within the Glasgow commuter belt.

Property descriptions and related information displayed on this page, with the exclusion of Running Costs data, are marketing materials provided by DM Hall LLP, and do not constitute property particulars. Please contact DM Hall LLP for full details and further information. The Running Costs data displayed on this page are provided by PrimeLocation to give an indication of potential running costs based on various data sources. PrimeLocation does not warrant or accept any responsibility for the accuracy or completeness of the property descriptions, related information or Running Costs data provided here.