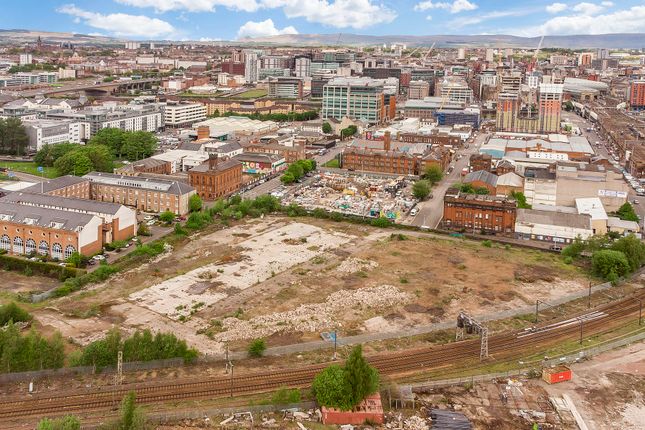 This development opportunity is located in the city of Glasgow, the economic hub of Scotland with a population of 600,000 and in excess of 1.675 million within the wider metro area. Scotland’s capital city, Edinburgh, lies 40 miles to the east, the two cities connected by enviable road, rail and bus links.

The M8 motorway, which travels through the city, provides access to Edinburgh and the north with the M74, which flanks the southeast of the city centre, providing links to the south. The city has excellent local and national rail/bus links with Glasgow International Airport only 8 miles to the west of the city centre providing connections to destinations throughout Europe and the rest of the world.

The city is the principal economic centre of the Scottish economy. It has for many years delivered a strong track record in attracting inward investment providing an enviable mix of business, productivity, innovation and investment establishing one of the most diverse and forward thinking cities in Europe. The city is proud to have been awarded the best Convention Bureau in the UK, is one of the world’s top Ultimate Sporting Cities and is one of the UK’s largest and most successful shopping locations outside London.

The site is situated in Tradeston, a transition area of the city bounding the south banks of the River Clyde. The areas industrial heritage and proximity of the city centre affording it excellent road, public transport and pedestrian connectivity.

This regeneration area has been boosted by the much publicised mixed use Buchanan Wharf development currently under construction lying 350m to the sites north. Around 470,000 sq ft of office space has been pre- sold to Barclays Bank with an understood option agreement on a further 210,000 sq ft. This deal alone is creating an additional 2,500 jobs and doubling their current Scottish workforce. The remainder of the scheme will provide 324 btr apartments and supporting amenities. The city council are also investing £1.20m to improve the public realm within Tradeston and access links to the city centre.

250m beyond Buchanan Wharf lies Glasgow’s International Financial Services District. This district is home to multiple international financial services companies including Morgan Stanley, J P Morgan and Credit Suisse. There is currently 890,000 sq ft of office space under construction with pre-lets in place to hmrc and Clydesdale Bank (Virgin Money). The district has already created over 15,000 jobs and with this current development pipeline substantial future employment opportunities will exist.

The subjects comprise a raised brownfield development site of regular shape accessed off Cook Street. The site extends to 1.805 hectares (4.46 acres) and is bounded by Cook Street to its north, M74 to its south, the main Central Station railway line to its east and residential conversions to its west.

Glasgow city centre currently has c.20,000 residents. This population lies significantly behind cities such as Liverpool, Manchester and Birmingham. It has now been identified and fully accepted that population density is crucial to the sustainability of a city centre and therefore it is the ambition of Glasgow City Council to grow the population to 40,000 by 2035. Amongst other proposals, it is intended this will be achieved by actively encouraging larger scale residential developments on brownfield sites within the city centre.

In April 2016, planning permission was granted on the site subject to Conditions and a Section 75 agreement for a residential scheme providing 398 one and two bedroom units with on-site car parking and two commercial units (15/01689/DC). This consent has lapsed, although provides an insight into expected density should a similar scheme be promoted for local authority consent.

Please refer to Glasgow City Centre Planning Portal for further information in relation to this scheme.

Our client has commissioned an Engineering Site Assessment on the site. This report is available on request.

Our client is inviting offers on this opportunity. Preference will be given to clean offers and only those with limited suspensive conditions.

In the normal Scottish form addressed to this office.

Each party to bear their own legal costs.

To be mutually agreed.

Property descriptions and related information displayed on this page, with the exclusion of Running Costs data, are marketing materials provided by Allied Surveyors Scotland, and do not constitute property particulars. Please contact Allied Surveyors Scotland for full details and further information. The Running Costs data displayed on this page are provided by PrimeLocation to give an indication of potential running costs based on various data sources. PrimeLocation does not warrant or accept any responsibility for the accuracy or completeness of the property descriptions, related information or Running Costs data provided here.