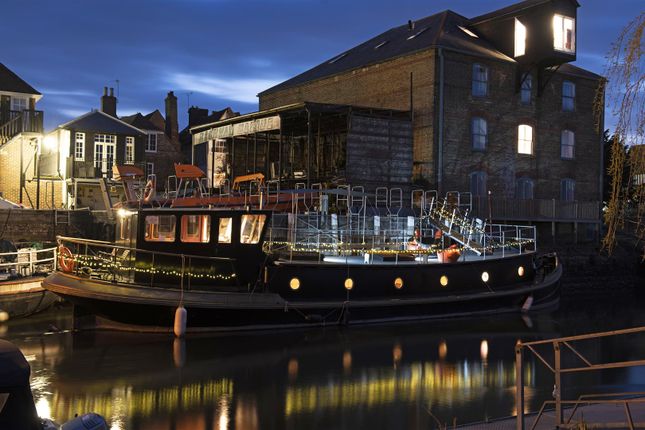 Miles & Barr Commercial are delighted to bring to market this turn-key business opportunity. It was fully restored from 2002 to 2007, with further updates made by the current owner in 2018 including a full exterior repaint, electrics supply overhaul and re-furnishing. Interior updates 2020 during Covid lockdown - Farrow & Ball Hague blue. The barge would make an ideal live-aboard or holiday home, or could continue in its current guise as an Airbnb destination.

Miscellaneous:
Mooring in Sandwich Town centre
New anodes and hull painted below the waterline in 2016.
Full out of the water survey 2020

The historic Medieval market town of Sandwich, is named after the eighteenth century aristocrat, The Fourth Earl Of Sandwich, John Montagu, he requested that his staff bring him meat tucked between two pieces of bread, with others then ordering “The same as Sandwich”. A museum is now housed within the Guildhall which was built in 1579, it is possible to see the Magna Carta here along with the sister document the Charter Of The Forest dating from 1300, not far from the distinctive Toll Gate are the Salutation Gardens designed in 1912 by Sir Edwin Lutyens, a beautiful garden and place for afternoon tea. This quaint town is one of the Cinque Ports and is situated on the River Stour with water-based communities both upstream and downstream including a seal colony which can be viewed from vessels in the estuary where the river meets Pegwell Bay. Famous Golf Courses include Royal St Georges and Princes where the British Open Tournament has been held on a couple of occasions, the area is also hugely important for migrating birds with the British Trust for Ornithology operating from their base at Sandwich Bay which is within the desirable residential private estate. Sandwich town is made up of often narrow streets with excellent examples of timber framed buildings, to the extent that Strand Street has the longest unbroken stretch of such buildings in England. This charming town feels like a village and has a real sense of community and a quieter pace of life where independent retail can still be found.

Property descriptions and related information displayed on this page, with the exclusion of Running Costs data, are marketing materials provided by Pearson Gore, and do not constitute property particulars. Please contact Pearson Gore for full details and further information. The Running Costs data displayed on this page are provided by PrimeLocation to give an indication of potential running costs based on various data sources. PrimeLocation does not warrant or accept any responsibility for the accuracy or completeness of the property descriptions, related information or Running Costs data provided here.