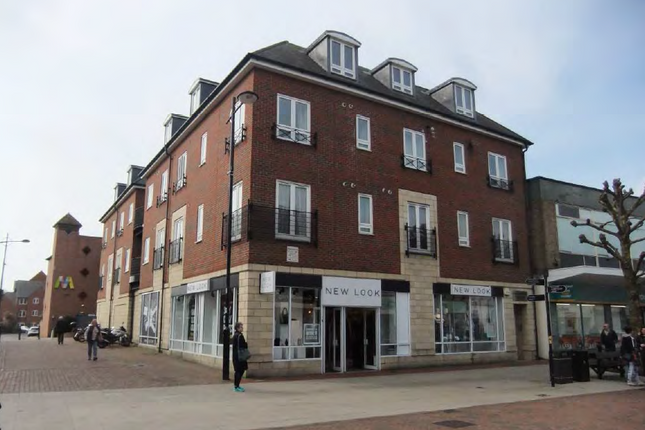 Description
The subject property comprises an end of terrace mixed use building which is arranged over
ground, first, second and third floors. The ground floor and part first floor comprise retail
accommodation with first floor ancillary. The remainder of the first floor and the second and third floors have been sold off on a long lease and comprise residential accommodation. The residential upper parts are accessed via a doorway located to the west of the retail unit.

The retail unit is arranged to provide a customer area fronting West Street with changing room, stock rooms, an office a disabled WC and a further staff WC located to the rear. There are double rear loading doors which lead out to Bulbeck Road.

As the upper parts have been sold off we were only able to gain access to the retail element of the property.

Havant is a town in the south east corner of Hampshire, which lies on the south coast of England and has a population of approximately 45,000 (Census 2001). The town is situated approximately 10 miles north east of Portsmouth, 12 miles west of Chichester, 22 miles east of Southampton and approximately 72 miles south west of London.

The town is well served by road connections as it is located at the southern end of the A3(M). The M27 and M275 motorways are in close proximity to the west and provide access to the wider motorway network. Junction 5 of the A3(M) is located one and a half miles to the south-west of the town centre and Junction 12 of the M27 (M27/M275 junction) is approximately four miles to the west.

Havant railway station provides good connections to London with an average journey time of one and a half hours, as well as Portsmouth and Brighton. Gatwick Airport is 50 miles to the north-east, and Southampton airport is 22 miles to the west. Situation
West Street is a pedestrianized retail street in Havant which provides access to the main covered shopping centre in Havant known as the Meridian Centre. Both West Street and the Meridian Centre are considered the prime trailing pitch.

The subject property is located on the south side of West Street, approximately 100 yards east of the junction with Park Road Street and around 60 yards to the west of the entrance to the Meridian Centre.

The surrounding area generally comprises a mix of retail and residential uses. Nearby occupiers include Vodafone, Clarkes, Boots and Halifax.
Arrange Viewing

Property descriptions and related information displayed on this page, with the exclusion of Running Costs data, are marketing materials provided by Royal Estates, and do not constitute property particulars. Please contact Royal Estates for full details and further information. The Running Costs data displayed on this page are provided by PrimeLocation to give an indication of potential running costs based on various data sources. PrimeLocation does not warrant or accept any responsibility for the accuracy or completeness of the property descriptions, related information or Running Costs data provided here.