The premium parents pay for a home near a top school

Considering buying a property in the catchment area of a leading state school? Here's how much extra it will cost you.

Parents are prepared to pay a premium of nearly £27,000 to live in the catchment area of a leading state school.

The average home near one of England’s top 100 secondary schools costs 12%, or £26,860 more than comparable properties in the surrounding area.

It is not just homes close to secondary schools that parents are prepared to pay a premium for, with properties in the catchment area of one of the country’s top 1,000 state primaries selling for 8% more than those nearby.

One in five families is even prepared to live in a smaller home if it enables them to get their child into a good school, according to Santander.

Miguel Sard, managing director of mortgages at Santander UK, said: “If families are looking to move into a catchment area specifically to boost their chances of getting into an elite school, they can expect to pay a hefty price.”

Homes that are in the catchment area for a leading state school are in significant demand from parents with school-age children.

But the supply of properties coming on to the market is likely to be limited, meaning the competition pushes prices higher.

Even so, many parents are likely to view buying a more expensive property as being considerably cheaper than putting their child into a private school if they cannot get them into a good state one. 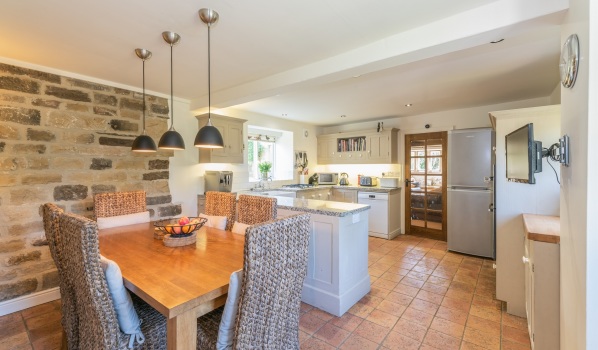 Above: three-bedroom house for sale in Ashover, Derbyshire

Those in London have to shell out the most to get their child into a top state school at an average of £70,675, or 15% compared with comparable properties in the surrounding area.

Homes in the catchment area of good schools in the south east are typically £40,294 more expensive, while those in the east carry a £30,658 premium.

But at the other end of the spectrum, parents in Northern Ireland only have to pay an extra £2,731 to live close to a top school, while those in the north west have to find an additional £14,393.

One in three parents with a school-age child are considering moving in the next two years in order to live near a good school.

But among those who had already made the move, 23% admitted they had paid significantly more for a property than they felt they could afford.

A quarter of parents said they had had to work extra hours to afford a home near the school of choice, while 25% had seen their commuting costs increase and 16% admitted they did not really like their new area.

Some parents took other steps to try to get their child into a good school, with 13% having them move in with friends or relatives to be in the catchment area, and 9% rented a second home in their desired area.

A further 13% of parents registered their child at a property in the catchment area but never actually moved them there.

Many parents admitted that once their child had gained a place at their desired school they had no intention of remaining in the area, with 54% planning to move away again.

What premium would you pay to live near a top state school? Tell us by posting a comment below...