Revealed: the most expensive places in the world to rent a family apartment

A household would need a monthly income of £39,057 to afford the rent in the priciest enclave.

The City of London is home to the most expensive rents in the world for a family, beating Monaco, San Francisco, Bermuda and Hong Kong to the top spot.

A family apartment in the capital’s financial district costs an average of £10.54 per square foot to rent and a household would need a monthly income of £39,057 to be able to afford it.

The location was significantly more expensive than Carre d’Or in Monaco, which came in second place, where a family apartment costs around £7.90 per square foot, meaning a monthly salary of £29,778 would be required to rent one.

La Condamine, also in Monaco, is the third most expensive place in the world in which to rent a family apartment, with Kensington and Chelsea and the City of Westminster completing the top five, according to furnished apartments website Nestpick.

Neighbourhoods in San Francisco, Bermuda and Hong Kong also made it into the 10 most expensive places in which rent a home, with prices coming in at around £4.55 per square foot.

The main reason for the high rental prices in these markets is a mismatch between supply and demand.

The cost of renting an apartment that would be suitable for a family is particularly expensive in the City of London due to a shortage of properties of that size. 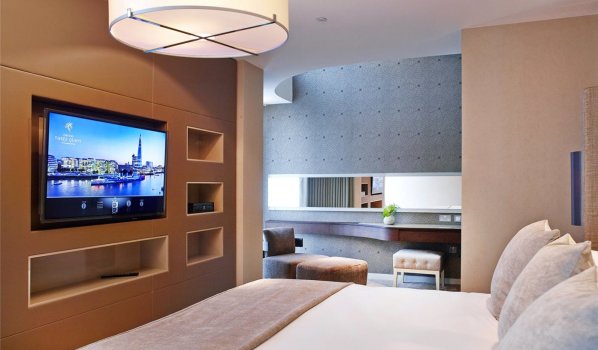 Above: Four-bedroom flat to rent in Cheval Three Quays, 40 Lower Thames Street, City of London, for £65,000 per month

The study also looked at the number of hours someone who was on the local minimum wage would need to work for in order to pay just one month’s rent.

Although someone on the minimum wage would have to work 305 hours each month to rent an apartment in the City of London, inequality was greatest in Hamilton in Bermuda, where they would have to work for 977 hours – more than three times as long.

It would take 652 hours of labour for a minimum wage worker on Hong Kong Island to afford to rent there, while Kowloon, also in Hong Kong, was only slightly better at 565 hours.

While London accounted for three of the top five places in which it is most expensive to rent a family apartment, it offered better value to tenants who were single.

As a result, someone in the City would need to earn nearly half as much to be able to afford to rent a home there compared with Condamine at £7,923 a month, compared with £14,546.

Where would you live? Tell us by posting a comment below...