Estate agents reported a further fall in activity during December as Brexit continued to weigh on the market.

Estate agents’ confidence in the sales market hit a 20-year low in December as activity continued to fall.

Enquiries from potential buyers, agreed sales and new homes coming on to the market all declined further during the month, with political uncertainty causing people to sit on their hands.

The number of homes being put on the market has now fallen in 19 of the past 24 months, leaving stock on estate agents' books close to record lows.

There was also a further increase in estate agents who reported seeing house price falls rather than rises, according to the Royal Institution of Chartered Surveyors (RICS).

Unsurprisingly, the situation left agents feeling pessimistic about the housing market’s prospects, with sales expectations for the coming three months hitting their lowest level since the RICS survey began in 1999.

RICS said the lack of supply and affordability issues, alongside the political uncertainty, were constraining the market and dampening demand among potential buyers.

In fact, new buyer enquiries fell for the fifth month in a row in December.

The situation is creating a vicious circle, in which homeowners delay putting their property on the market due to a lack of choice for their next home, while would-be buyers are forced to sit tight due to a shortage of properties for sale. 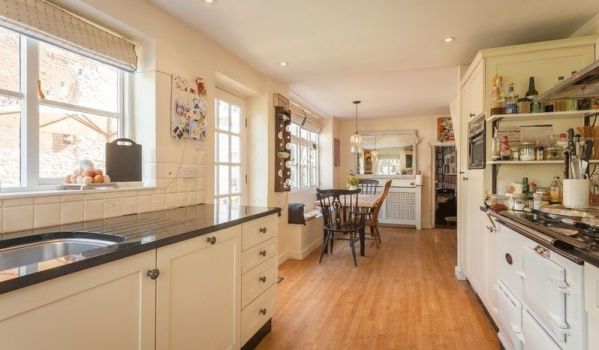 Above: Five-bedroom property for sale in Buckingham for £750,000

While sales dropped across much of the UK, there was a more positive trend in East Anglia, Wales, the North East and Northern Ireland.

The property market remains strongest in regions away from London and the South East, where affordability is less stretched.

While estate agents are pessimistic about the coming three months, they are more upbeat about the housing market’s prospects 12 months’ ahead, suggesting at least some of the current issues as being caused by uncertainty over Brexit.

With the exception of London and the South East, house prices are expected to either rise or hold steady across the UK in the coming year.

Simon Rubinsohn, RICS chief economist, said: “It is hardly a surprise with ongoing uncertainty about the path to Brexit dominating the news agenda, that even allowing for the normal patterns around the Christmas holidays, buyer interest in purchasing property in December was subdued.

“Looking a little further out, there is some comfort provided by the suggestion that transactions nationally should stabilise as some of the fog lifts, but that moment feels a way off for many respondents to the survey.”

What do you expect to happen in your local housing market in the months ahead? Tell us by posting a comment below...